Christ the King, Year A

listen to ‘Christ the King, Year A’ on audioBoom 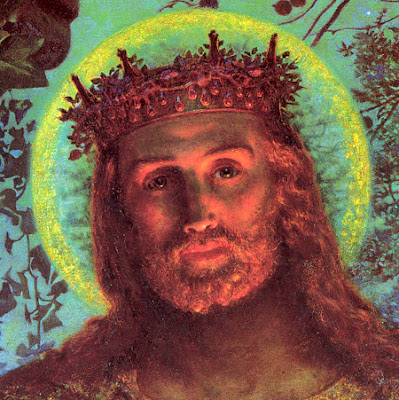 Mt 25:31-46; Ezekiel 34:11-12,15-17.
Today we keep the feast of Christ the King. I've been pondering this week that being a "king" is a rather old-fashioned concept. And I've been thinking that Shaftesbury is a rather old fashioned kind of place, and we probably have a much higher percentage of monarchists here that there are in other parts of the country.
But, and this is my point today, what KIND of king do we picture Jesus to be? Because His kingship isn't just a cosy nice traditional piece of symbolism. I want to make three brief points: how His kingship is modern, how it is old fashioned, and why it is so vitally important that we think of Him as 'king' at all.

First, His kingship is 'modern'. And by this I mean that He respects our freedom. He lets us do what we choose. He is not a tyrant. So on one level, He is like a modern king in a democratic state.

Second, however, He is also old fashioned. Although He leaves us free to choose whether or not to follow Him, He will also judge us for our behaviour -judge us on how we have USED that freedom. Both our first reading and our Gospel text described Him as judging and separating the sheep from the goats.
Let me specify this further and note that He will judge us according to HIS standards rather than according to our own. In the Gospel description of the judgment, both those who were praised and those who were condemned were told that they had not seen the truth in their actions. So, those who had failed to feed the hungry hadn't realised that they were failing to feed Christ, but The Lord didn't say, "That's alright, I realise you didn't realise it was me you were neglecting". And the Lord didn't say, "That's alright, I realise that you followed your own principles, and that's what counts". No, He condemned them. He condemned them because what they did was wrong. He condemned them because they should have known.
When Christ comes He will judge by His standards, not by ours.

HOWEVER it brings with it a practical conclusion. If I am to acknowledge that He is King then I need to submit myself to Him as His subject. And this is a very old fashioned, non-democratic thing.
But if I am to benefit from what His Kingship brings then I must commit myself to being His subject. I must accept what He teaches, strive to live His commands, call on His mercy when I fall, and rely on His strength amidst the trials of life.

So, to sum that up. Having a "king" may seem the kind of cosy nice traditional thing that we in Shaftesbury "go for". But with Jesus it means something very specific. He is a modern king in that He leaves us to be free. He is an old fashioned king in that He will judge us for how we use or misuse our freedom. And it is GOOD that He is our King, that He is in charge, because He is the loving shepherd of all who choose to be His subjects.
Posted by Fr. Dylan James, Catholic Priest, dual American-British citizen at 00:05