listen to ‘Remembrance Sunday & Dedication of Lateran Basilica’ on audioBoom 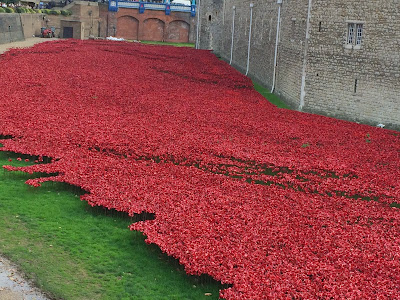 A couple weeks ago I went up to London and, like some of you, I went to see the poppies outside the Tower of London. For those of you who don't know, it's a special temporary memorial of 888,246 ceramic poppies -one for every British military casualty in the First World War, for the 100th anniversary of the start of WWI.
I mention this because today is Remembrance Sunday. But in the Church today we commemorate another sort of memorial: the Catholic Church’s central church monument: the Lateran Basilica in Rome.
I want to say a few words about both of these things. Because it’s sometime asked: Why build memorials and monuments? Why remember the dead?

The Lateran Basilica in Rome is the Pope’s Cathedral. It is dedicated to the St John, but also houses parts of bodies of the martyrs St Peter and St Paul. But it is a monument not just to them as individuals but to all that they signify. They signify loyalty to Christ as a value above all else, they signify that the Church is a body and unity that transcends all others, that the Church is built on them in ROME –the glue that holds the Church today. They signify that unity which transcends us as mere isolated individuals –for we are not just individuals we are part of a greater whole that has its meaning in Christ.
And the Lateran Basilica is built to remind us lest we forget that our communion comes through our Apostolic roots, lest we forget, forget who died, why they died, and what we are a part of by our union with them.

The many war memorials in our country are dedicated to those who have died.
In honouring them we remember a great many things.
For many, we recall their bravery and self-sacrifice.
For many, we also recall that they died in a great cause: that we free today, that we live under the rule of law not dictatorship today, because of those willing to die.
And we also honour the dead simply as a reminder of the HORROR of the wars they died in -we remember them so that we might be reminded to avoiding repeating such horror in the future.
And let me note this point:
We remember them because if we forget them we become something less ourselves, that England would be diminished if she forgot those who had died.
War memorials may be monuments erected TO the dead, but they are also erected FOR us the living –lest we forget.

In our second reading, St Paul spoke of the people of the church being “God’s building... YOU are that temple”(1Cor3:17). The TRUE monument that is erected to the dead, whether the dead of the wars, or the dead of martyrdom, The TRUE monument erected to them must be the lives of those who live afterwards –and we are called to live WELL by recalling what went before –lest we forget.

There are some people today who speak and think as if they were not just free but individuals that somehow existed ISOLATED from the history that preceded them, removed from the culture and society that surrounds them.
But we are NOT isolated individuals, we are PART of something that has preceded us and remembering the dead is not just an act of gratitude to those who risked their lives defending their country –it is also an act remembering WHAT we are part of: (1) what we do not wish repeated from the past, and, (2) the values we must learn from the past –lest we forget.