Silence in Church, 3rd Sunday of Lent, Year B

listen to ‘Silence In Church, 3rd Sunday in Ordinary Time, Year B, 11am audio’ on audioBoom 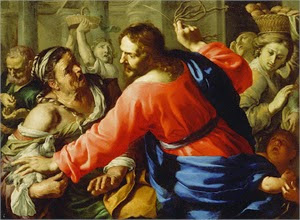 Jn 2:13-25; Ex 20:1-17
As some of you know, earlier this year I was in Rome for a clergy conference. And a highlight of the event was being able to attend Holy Mass with Pope Francis, something I'd not yet been able to do with our new Pope. As we all know, he's a very popular figure, with a relaxed, extrovert and joyful personality, all of which is readily observable at his public audiences in the manner in which he greets and smiles to people as he comes down the aisle.
Now, I note this because his behaviour during Holy Mass is noticeably different: he is solemn and composed, and as he walked down the aisle his eyes were either fixed forward to the altar or down to the ground. He was doing something SOLEMN and SACRED and his behaviour made that clear.
In addition, before he came out at the start of Mass there was an announcement that the crowds were not to applaud him or clap –we were gathered to worship God, not to be a papal fan club.
I found the whole thing immensely edifying, but it made we wonder about how we behave in Church for Mass here in Shaftesbury.

I say this today because, as I mentioned when I preached on this six years ago, today's Gospel text is the only time we see Jesus get truly ANGRY. The Lord is sometimes saddened by those who refuse to believe in Him, but this is the ONLY time the Gospels record Him being truly angry. And WHY was He angry? Because the Temple, His “Father’s House”(Jn 2:16), “the House of Prayer for all the nations”(Isa 56:7, c.f Jer 7:11)”, was being abused by people mis-treating it, treating it for uses other than worship.
What of our church here, the temple of the new covenant? Catholic Churches are consecrated for sacred use, for worship. And yet, often our parish church seems to be treated more like a talking place, a place to chat. And let me point out that the General Instruction n.45 (c.f. Inaestimabile Donum n.17) explicitly states that churches should be silent for prayer before and after Holy Mass.
In contrast, people often complain to me that they are unable to pray in our church because of all the talking. They say to me, “Father, this is a church, if I can't pray in church then WHERE can I pray! It's not right”
So, can I point out: we have a porch and hall for meeting and chatting. Please keep the church for prayer, but DO chat and meet in the hall and porch.

On a less specific, and hopefully less critical note, can I shift this slightly and say, if “the house of prayer” is so valued by the Lord, then surely TIMES of prayer also need to be valued in our lives. Our Faith calls on us to dedicate PLACES to prayer; we also need to dedicate TIMES to it.
In Lent we are especially called to pray, but this can also be a good time to reconsider the place of prayer in our lives the rest of the year too.
To consider: what sort of a regular pattern, a regular plan of prayer do I have?
Do I have a brief morning prayer, one I say when I wake?
Do I have a routine for praying before I sleep?
Do I thank God for the good things I've received? And tell Him I’m sorry for my daily sins.

To sum that up. Pope Francis is a joyful man, but he is solemn and focussed when saying Holy Mass. We might even say that He has joy in his heart BECAUSE he is focussed properly in his prayers and at Mass.
For us too, if we are attentive to our prayers, attentive to Mass, if we treat His church as a “house of prayer for all the nations” (Isa 56:7, c.f. Jer 7:11), then the Mass, that re-connection with the Divine that the Mass can give, will bring joy to the rest of our lives too.

Silence in Church Please:
Before Mass: “Before the celebration itself, it is commendable that silence be observed in the church, in the sacristy, in the vesting room, and in adjacent areas, so that all may dispose themselves to carry out the sacred action in a devout and fitting manner.” (GRIM, n45, 2000AD)
After Mass: “The faithful are to be recommended not to omit to make proper thanksgiving after Communion. They may do this during the celebration with a period of silence... or also after the celebration, if possible by staying behind to pray for a suitable time.” (Inaestimabile Donum n.17)