listen to ‘The 4th Cup, Passion Sunday, 11am Audio’ on audioBoom 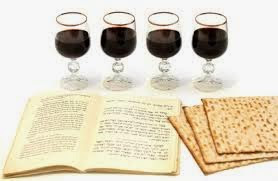 Mk 14:1-15:47
In attempting to contemplate the momentous events we have just heard in the Passion I would like to focus on what the Lord Jesus thought, intended, and chose for us. And to do this by considering what He chose to drink, and what He refused to drink, 4 chalices. Because the real ‘chalice’ He chose was the Passion, a ‘fourth cup’ that was not a physical drink at all.
This is the ‘4th cup’ interpretation of Scott Hahn http://webpages.marshall.edu/~trimbol3/4thcup4.htm

Before I comments on the chalices, let me note why this is important:
Its important because it shows us what the Lord Jesus understood Himself to be doing.
It shows us just how fully He entered into all of this FOR US, for our sake.
It wasn't just a terrible thing that the Father then, almost by chance, brought something good out of by the Resurrection.
No, it was all an act of love on behalf of the God-man Jesus Christ.

So, 4 drinks.
There was a chalice that we heard Him refuse to drink: As they started His crucifixion they offered Him wine mixed with myhrr (Mk 15:23 or ‘gall’ (Mt 27:34)). He refused this drink. Why did He refuse it? Because this mixture of wine was offered to those being crucified as an opiate for those condemned to die, given to them to numb the pain. Christ refused this because He wished to fully accept the pain, for us.

He refused that pain-killing drink because, as we heard earlier in the narrative, He had already accepted to drink another chalice, the chalice of suffering. As we heard in the ‘Agony in the Garden’, He contemplated the immensity of the suffering that laid ahead, an ordeal so horrific that His human will in some sense ‘hesitated’, recoiled, before it. Thus He prayed, "Father... Take this cup away from me"(Mk 14:36).
And yet, He chose to accept it, saying, "yet, not my will but yours"(Mk 14:36).

The acceptance of this chalice, however, was not a one-off moment. It was part of a plan He entered into for Him to be the New Passover, the new Lamb of sacrifice. In the old Passover there was a sacrificial Lamb. But Christ wished to institute something new, with a New Passover and a new Passover Lamb. And this is shown in the words we heard Him utter at the Last Supper. As the Scripture scholar Scott Hahn notes, the Passover meal consisted of a series of cups being drunk, and yet, in the narrative, it is clear that He has skipped the last cup:
He drank the chalice that instituted the Eucharist, the Mass, saying, “This is my Blood…”.
But He then declares that He will not drink again, "I will not drink again of ten fruit of the vine until that day when I drink it new in the kingdom of God"(Mk 14:25).
They then sing the Passover psalms, as we heard, but instead of doing what the Passover ritual called for, instead of then drinking the final cup, the native indicates that they then immediately "went out to the Mount of Olives"(Mk 14:26).
He omits the final cup, the final cup He has declared He will not drink until “the kingdom”.

When does He drink the final Passover cup? The fourth cup?
Well, He proceeds straight from the Passover to the Garden, where He then prays about the ‘chalice’ to come.
So the ‘4th Cup’ by which He completes the Passover is the ‘chalice’ of the suffering of the Cross.
It is the sacrifice that makes Him the sacrificial Lamb of the New Covenant, of the New and definitive Passover.
Thus, the moment we hear Him drink again is at the completion of that sacrifice:
At the very end someone gave Him “a sponge dipped in vinegar”(Mk 15:36). He drank His final drink, and, “crying out in a loud voice, breathed His last”(Mk 15:37).
The New Passover was complete. Its final cup was drunk.

And, to repeat what I started by noting: Why does this matter?
It matters because it shows us how consciously He entered into this.
He loves us. He cares for us. He chose to be the sacrifice.
“Behold the Lamb of God, Behold Him whom takes away the sins of the world”