listen to ‘Ascension, Year B, Audio 11am Mass’ on audioBoom 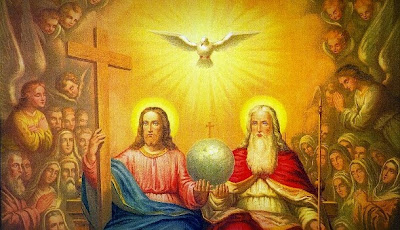 Mk 16:15-20; Eph 1:17-23
Jesus ascended to “the right hand” of the Father
-that statement is so important that we heard three times already, in the second reading (Eph 1:20), in our Gospel text (Mk 16:19), and in the Gloria; and we'll shortly repeat it in the Creed.
The issue I would like to address today is this: Why should it matter to us that Jesus is at “the right hand” of the father?

First, what does “the right hand” mean?
In modern usage it means little to us today, but in antiquity it was an expression of great significance. In antiquity there was always a king. And, in the throne room, sat at “the right hand” of the king, there was someone who shared in the power and authority of the king. Thus St Thomas summarises by saying,
“Christ is said to sit at the right hand of the Father inasmuch as He reigns together with the Father, and has judiciary power from Him; just as he who sits at the king's right hand helps him in ruling and judging.” (ST III q58 a1)

But, why should this matter to me and to you? Why should WE care that Jesus is at “the right hand” of the Father -obviously, that’s good for Him, but why is that good for us?

In addressing that question we address the whole reason that He came, and the truth about the reality of the Incarnation.
The second person of the Trinity, the Word of the Father, took human flesh, took a complete human nature, a human body and a human soul. This event is so pivotal to our faith that every Sunday the liturgy of the Mass tells us to us bow when we recite the words in the creed: “and became man”.

He LOWERED Himself to accept our humanity. (Phil 2:8)
The point, TODAY, is that by doing this He RAISED our humanity. He lifted us to a dignity and honour that He bestowed on NONE of the rest of His creation. The plants and animals do not show this dignity. Not even the ANGELS have been given this dignity.
And, TODAY, the ascension points out to us that He did not then cast aside His humanity at the end of His earthly life. Rather, He has taken it up into heaven with Him.

For you and for me, the fact that the human nature of the Lord is in Heaven is a perpetual sign of the dignity that has been bestowed upon us. And with this, the care, the love, and everything else that He ever has for us.

And all of this is expressed when we recall that He ascended and is sat at “the right hand” of the Father.
Posted by Fr. Dylan James, Catholic Priest, dual American-British citizen at 00:05