Assumption of the Blessed Virgin Mary (transferred from the 15th August) 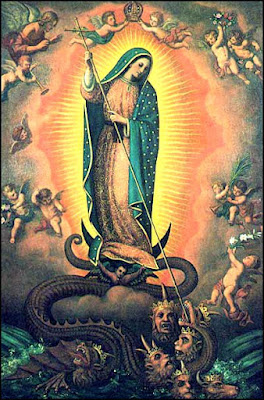 Rev 11:19;12:1-6.10
For today’s feast of the Assumption (when we recall that at the end of her earthly life Our Lady was taken up into heaven, taken up body and soul), for today’s feast I’d like to focus on our first reading, which was from the book of Revelation, also known as the Apocalypse.
In the vision described in that reading, as we just heard, two ”signs” appeared in the heavens, two signs that characterize the Christian life.

One sign was of the “dragon”(Rev 12:3), and the battle with the dragon is a symbol of our lifelong struggle against the Devil. Now, as we all know, its not very fashionable to talk about the Devil, people often get embarrassed if a preacher refers to him as something real. What you might not know, however, is how frequently Pope Francis speaks about the devil: he mentions him almost daily in his homilies. You can Google this quite easily: “Why does Pope Francis talk about the Devil so much?”. The Pope has a very clear awareness that our daily struggles in life have the devil as their ultimate cause. As the Bible puts it, we battle not against earthly powers but spiritual ones (e.g. Eph 6:12).
In acknowledging this we confront the reality that much of life is tough, much of life is suffering, much of life is a battle. But there is a battle BEHIND the visible battles: In my temptations, in my afflictions, and so forth, who is the one who is seeking my downfall? The Devil. Satan.

Back to our first reading: There was another sign referred to as appearing in the skies: “a woman, adorned with the sun, standing on the moon, with the twelve stars on her head as a crown”(Rev 12:1). In fact, this is not just ‘another’ sign but the “great” sign.
This ‘woman” has a twofold symbolism.:
On one level she is the Church, the Bride of Christ. And, as the next verses (which we didn’t hear read) say, the dragon pursues the woman and her descendants (Rev 11:13,17). The dragon makes war against the woman, but is defeated. The woman, however, does not fight in her own defence. Rather, the Lord raises up those who fight to defend her. We didn’t hear it in the short excerpt we were given, but: St Michael and his angels fought against the dragon (Rev 11:7-9); the earth itself opened up to swallow a river sent to drown the woman(Rev 11:16); the woman was given wings to fly to safety (Rev 11:14); and, as we heard in the text, the woman was given a place of safety, “a place prepared by God”(Rev 11:6).

This woman, as I said, is a symbol of the whole Church, of all of us, but at another level, the most IMMEDIATE level, she is Our Lady, the Blessed Virgin, the Mother of the Lord Jesus. The Church sees this text as one of the definitive signs that Our Lady has already been taken up to heaven, as we celebrate on today’s feast of the Assumption. She has been lifted above us, as a sign of hope for us who struggle on. And yet, as Pope Francis noted in a sermon a couple years ago, she also “walks with us always”. She is in travail with us, not distant from us, “struggles with us, sustains Christians in the fight against the forces of evil”. In this context Pope Francis particularly encouraged his listeners to use the Rosary daily in our spiritual warfare. As is often noted, though she is the weak humble woman chosen by God, she has also become, by His power, the mighty powerful woman who crushes the serpent’s head, fulfilling the prophecy made to Eve at the dawn of time (Gen 3:15).

To sum that up:
Our Lady has been assumed into heaven, the woman who is the “great sign” which appeared in heaven.
As an image, she is a symbol of us, the Church.
In hope, she is the sign of the destiny that we are called to pursue.
The battle the woman waged against the dragon is an image of the Blessed Virgin’s victorious struggle against the devil.
And, finally, she is the strong woman who is our assistance in our lifelong battle against the spiritual powers of darkness. So in our daily struggles let us be sure to call upon her.
Posted by Fr. Dylan James, Catholic Priest, dual American-British citizen at 00:05