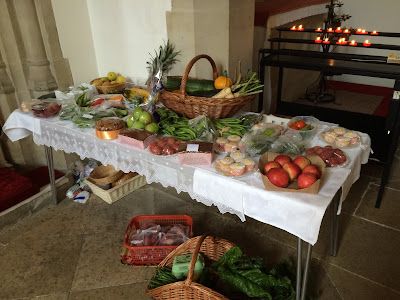 James 2:1-5; Isa 35:4-7; Mk 7:31-37
Picking up on our second reading from St James, and thinking of our parish Harvest Festival this weekend, I’d like to spend a moment today considering how we look at “the poor” and how we look at ourselves.
Now it’s a noteworthy point that very few people I meet think of themselves as rich. I meet very few people who say, “I’m rich, I’m comfortable, I don’t know what to do with all my money”.
Instead, I meet parishioners who say things like, “We’re not going to be able to repair such-and-such this year because we’ve not got the money”.
Or, even if they’ve managed to go on holiday, might say something like, “It’s been wonderful to go on a proper holiday this summer, we’ve not be able to for years” -aware that money feels tight.

Such observations are real. And they indicate a true sense of not having the funds we would like to have.
However, a harvest festival is a moment to try and step back and see the bigger picture, and realise that for almost all of us in Shaftesbury, we need to acknowledge that there are most people in the world are much poorer than we are.

In our second reading St James said, “it was those who are poor according to the world that God chose”(James 2:5). Who were those “poor”?
The Israelites in slavery in Egypt, under the harsh yoke of the Pharaohs.
The Jews starving in hunger, wandering in the desert.
The captives in Babylon, homeless and driven from their land.
And, thinking of the imagery in today’s Gospel and first reading, “the poor” were:
The blind, the deaf, the lame.

And what did God do for such “poor”?
He gave the Jews a Promised Land, flowing with milk and honey.
And the Lord Jesus gave sight to the blind, and healed the sick.

But, let us note, though St James repeatedly berates the wealthy for not caring for the worldly needs of the poor, nonetheless, the REAL blessings he says God offers the poor are something else.
He says that God chose them “to be rich in FAITH and to be heirs to the kingdom which He promised to those who love Him”(James 2:5).
That kingdom, the one established in the New Covenant in Christ, is an eternal kingdom in HEAVEN.
And the poor he speaks of are rich in “faith” because they have allowed their lowliness to be something that causes them to humbly reach out to the Almighty.
In contrast the Scriptural imagery portrays the rich as self-satisfied, as proud, and as not aware that they need to reach to the Lord.

To conclude, do we think of ourselves as “poor” or as “rich”?
In comparison to much of the world, most of us need to acknowledge that we are “rich” in possessions and thus need to be generous with them.
But, before the Lord, we are “poor” and needy, and the manner in which the Lord raises up the lowly is reminder that we need to be sure we remember our poverty before Him, because it is when we do that He raises us up too.
Posted by Fr. Dylan James, Catholic Priest, dual American-British citizen at 00:05