Meeting Christ In the Cross, 24th Sunday in Ordinary Time, Year B 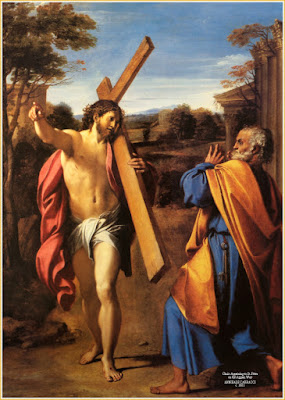 Mk 8:27-35
When Christ hung upon the Cross very few people recognised Him for WHO He truly was.
In terms of what He WAS: He was the Son of God, He was the Messiah, He was the Chosen One they were all waiting for.
But, in terms of what He LOOKED like: He was battered, bruised, bleeding, ugly.
There was one person, however, and St Mark’s Gospel makes a point of noting it, there was one person who at that very moment, in the Messiah’s weakness and ugliness, that recognised Him. St Mark notes that the centurion who stood at the foot of the Cross, who had seen Him suffer, had seen how He reacted to all that happened to Him –that centurion was moved to faith in Jesus. This pagan centurion declared, “Truly, this man was the Son of God!”(Mk 15:39). It was precisely at that most UNLIKELY moment that the centurion confessed who Jesus was.

That account of the centurion is recorded for us by St Mark, and the account we heard in today's Gospel text was also from St Mark. Many commentators note a deliberate parallel St Mark gives in these two confessions. The confession we heard today by St. Peter also truly recognised Christ, with St. Peter saying, “You are the Christ”, the Son of the living God (Mk 8:29, cf Mt 16:16). St Peter’s words didn't recognise Him at the Cross, but the words of the Lord Jesus at that moment pointed St Peter towards the Cross. The Lord’s words followed St Peter’s confession of who He was by declaring that the Christ was going to suffer and be killed, and referred directly to the “cross”(Mk 8:34).

St Mark is doing this very deliberately. The confession by the centurion of who Jesus was AT THE CROSS, and, the prophecy of the Cross to St. Peter at the moment when St. Peter is recognising WHO Jesus is, this all has a profound point:
WHO Jesus is is intrinsically linked with the Cross.
You cannot recognise the TRUE Jesus without recognising that He is the One who has come to die, come to die for us. He is “the suffering servant”(Isa 53), suffering with us and for us.

So, let us each ask ourselves when we recognise the presence of the Lord Jesus in our lives.
Because if we know Him for who He truly is, if we know Him as the One who suffered for us and even now is with us, then we shouldn't be surprised to recognise Him in tough moments as well as easy ones. Both are “blessed” moments –but in different ways.
And St Mark’s deliberate connection of the identifying of WHO Jesus is with the CROSS should remind us that it is often on the Cross that we find Him still today.
Posted by Fr. Dylan James, Catholic Priest, dual American-British citizen at 00:05