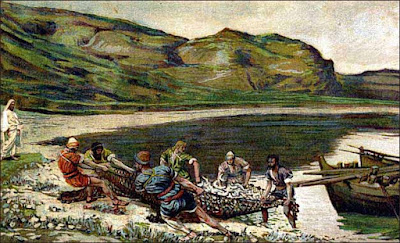 This was the sermon at the Saturday vigil Mass. There were Confirmations at the Sunday Mass.

Jn 21:1-14 c.f. Lk 5:4-11
In the account we just heard of the Lord appearing and working the miracle with the catch of fish, we have a model of how the Lord perseveres in reaching out to us in our lives, even when we we are slow to be aware of Him, and slow to be aware of what He is up to.

Let us note how the account begins: It begins with Peter and the others going out fishing.
It might be easy for us to fail to grasp the significance of this, after all, Peter and most of the apostles were fishermen.
The thing, however, is that they had STOPPED being fishermen. In fact, at this stage it seems that they hadn’t been fishing for three YEARS! At the very start of the Lord Jesus’s public life He had called them from their boats, called them to no longer be fishers of fish, but to be “fishers of men”(Lk 5:10).
They had then been with Him three years.
And then He had died.
Their returning to the fishing seems symbolic of their returning to their life BEFORE Jesus.

Now, the Lord had already appeared to them twice after rising from the dead.
But, it seems, they hadn’t really grasped the significance of this.
He had appeared, and then gone.
It somehow hadn’t fully sunk in WHAT they were to do in response to this.
So, they had returned to their OLD way of life: fishing.

How then does the Lord respond?
Does He get angry and impatient? Does He say, “I’ve already shown you the holes in my hands and my feet, what more do you need me to do?!!”
No, He reached out to them in a more patient way. The way a true teacher is patient with pupils who are slow to understand.
He worked a miracle with their fishing.
AND, the point is this: He works the SAME miracle that He had worked at the beginning when He called them.
When they were fishermen, at the beginning of His public life, the miracle had the same pattern: They had worked all night, caught nothing, He tells them to throw the nets to the other side, and they get a haul so HUGE it is miraculous.
And, recognizing the same miracle, by the same Jesus, John cries out, “It is the Lord!”(Jn 21:7).
And then the Lord calls to a new beginning, saying, “Follow me”(Jn 21:19).

You and I can, likewise, be slow to appreciate what the Lord has done and is doing in our lives.
You and I can, so often, return to our former ways of life. Ignoring whatever the Lord has done for us previously: and He has given all of us many different new starts.
The point is this:
He reaches out to us again, as He did to Peter and the others even though they had returned to their old way of life.
He was there among them, even before they recognized Him.
He was working among them, miraculously, even before they recognized Him.
And He is with you, and with me, even when we forget Him and fail to recognize Him.
And He calls us, again, to “follow” Him, by living His resurrection power, by being forgiven for our sins, and by living His love in the midst of whatever “fishing” He calls us to do.
Posted by Fr. Dylan James, Catholic Priest, dual American-British citizen at 17:00