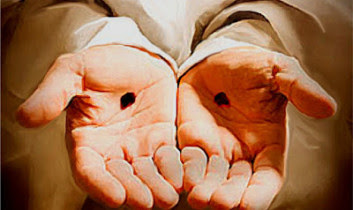 Jn 20:19-31
This year, as you hopefully recall me saying many times, has been dedicated by Pope Francis to Mercy. And this Sunday, in particular, is the Divine Mercy feast day previously established by Pope St John Paul II. So, to help us think about mercy I want to use two images to try and show how the Lord God, because He is merciful, transforms dirty corrupt things into beautiful wonderful things.

My first image is the changing of water into wine, Our Lord’s first miracle at Cana. And I want to point out a detail that Pope Francis notes, namely, the type of water jars that were used. These weren't any random water jars. Rather, they were the water jars used for the ritual purifications of the Jews, the ritual purifications to purify them from their sins. So the Lord Jesus took this thing associated with sin and transformed it into wine, transformed it into something new, and wonderful, and celebratory. And not just any old wine, but, as you hopefully recall, the wine was called “the best”(Jn 2:10).
So, in mercy, the Lord doesn't discard what is associated with our sins, but transforms them into something glorious.

My second image relates more obviously to today’s feast: the pierced hands of our Lord. Our Lord had suffered on Good Friday. He had been crucified. His hands and feet had been pierced with nails. They had become things of ugliness and suffering and corruption. And, we might note, this piercing was because of our sins. As Isaiah says, “He was wounded for our sins”(Isa 53:5, c.f. “They will look on the one who, they have pierced”(Zech 12:10; c.f. Jn 19:37)
But, what does He do after His resurrection? He publicly displays them to Thomas and the others as signs of His triumph, as marks of His glory. He transformed something that had become gross and ugly into a thing of beauty, triumph, no glory. No longer bleeding and painful but alive –not discharged and hidden, but transformed
This, Pope Francis is reminding us, is our Lord’s continual pattern. He takes what is worst in our lives and uses it to make something glorious.

So, HOW does the Lord do this? In particular, how does He do this with our sins?
The answer is partly linked with His mercy, which CHOOSES to reach out to lowly things,
And partly linked with our HUMILITY, when we choose to acknowledge our need, and lowliness, and sin, and bring it to Him.
Our sin, our ugliness, can be something that leads us to recognise our need of a saviour, and lead us to therefore turn to the Lord Jesus as the definitive Saviour.
Whenever we do this, whenever our sin leads us to turn to God, His mercy transforms our rottenness into something good and glorious.
And, to repeat, this is our Lord’s continual pattern. That’s why Scripture speaks of His making a “new creation” out of the old, rather than of His discarding the old.

To sum that up, at His first miracle at Cana the Lord made “the best wine” out of the water used for purification from the dirtiness of sins. After His resurrection He took the wounds that had been ugly and associated with sin and transformed them and displayed them as things of glory. And, now, for you and me, if we acknowledge our sins, and we confess them and bring them to Him, then our very weakness and lowliness and SIN will be not only be forgiven by Him but transformed into an opportunity of grace and glory –because His “grace is made perfect in weakness”(2 Cor 12:9).
Posted by Fr. Dylan James, Catholic Priest, dual American-British citizen at 00:30