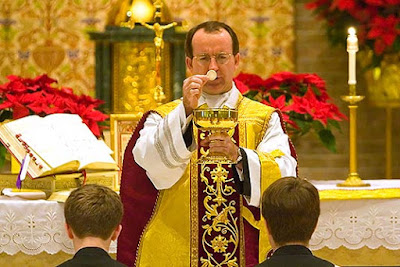 on Jn 1:29-34
At every Mass, the priest raises the consecrated host and we say, "Lord, I am not worthy that you should enter under my roof", and I imagine that many of us can say those words without thinking about what they mean -which would be a great shame, because they are profound words that today's gospel has much to tell us about.

What must a non-Catholic think as he hears us say those words? He might see that we are getting ready to go to Communion, and what do we say? "Lord I am ready”?" No! We say the very reverse, AND YET go and receive anyway.

And the reason we receive anyway lies in the very nature of WHO it is that we are receiving, who it is that the priest declares the host to be.
The priest says the words we heard spoken by John the Baptist, "Behold the Lamb of God, behold Him who takes away the sins of the world" (c.f. Jn 1:29), because the host is one and the same Jesus Christ who John identified 2000 years ago.

The phrase "The Lamb of God", might seem a bit obscure to us, but it was very significant to the Jews that John was speaking to. They knew the role that the lamb had played in their history and still played in their religion, and to call Jesus THE Lamb of God was to proclaim His saving role from sin.

When Moses and the Jews were enslaved in Egypt, it was the blood of the sacrificed lambs, posted on their doorposts, that caused the angel of death of recognise and spare them. Every year they commemorated this in the sacrifice of the Paschal Lamb in the Temple (Dt 16:5-6), recalling (1) their liberation from Egypt, and (2) the covenant bond that God formed with His people, and (3) the communion this gave between God and His people. The Lamb was THE most significant Old Testament animal of sacrifice.

The Lord Jesus is the TRUE Lamb of God, because His sacrifice on the Cross is the complete and total satisfaction for our sins. This sacrifice (1) liberates us from the slavery of sin, (2) restores our union with God, the union broken by sin, and (3) this new union is completed by our receiving the Lord Jesus in Holy Communion –a pattern that was also present in the consuming of the Old Testament sacrifices.

This is what we should recall in the Mass. We, as a congregation, the say the prayer, "Lamb of God, you take away the sins of the world, have mercy on us...", and at the same time the priest BREAKS the host. This is a symbol of Christ's body being broken on the cross, of His being the eternal sacrifice for sins.
It is because HE is the one who takes our sins away that we are able to receive Him, even though we ourselves are not worthy of Him.

(Pause)
This said, we do need to prepare, and we do need to be ready if we are to receive Holy Communion.
If we wish to have the benefits of the forgiveness that Christ's sacrifice can give us, then we must repent of our sins.
St.Paul tells us that those who eat “the Lord's supper” unworthily are eating condemnation upon themselves (1 Cor 11:28). Following this teaching of Scripture, the new Catechism(1457) and the Law of the Church(canon 916) remind us, that if it is a serious sin in question: we must repent and go to confession before we receive Holy Communion. If our marriage state is irregular and unresolved, it must be addressed before we can be ready to receive Holy Communion.
Because we cannot acknowledge Him to be the lamb who takes our sins, if we do not also desire to have our sins taken away.

But ultimately, it is because of who He is that we are able to receive Him. Because we will never be fully worthy on our own grounds, we can never repay Him what we owe Him. We can receive Communion because of the love He has lavished on us, and His sacrifice for us, a sacrifice that can HEAL those who turn to Him,
And so we say in prayer the words once said by the centurion to the Lord Jesus, "Lord, I am not worthy that you should enter under my roof, but only say the word and my soul SHALL be healed.”(Mt 8:8)
Posted by Fr. Dylan James, Catholic Priest, dual American-British citizen at 14:01