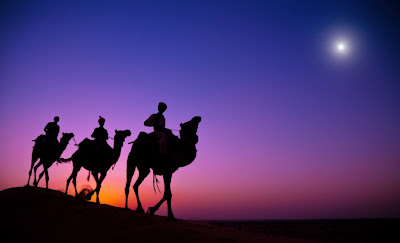 Mt 2:1-12
Today we recall the wise men, the “magi” who came from the East to worship the baby Jesus, bringing gifts of gold, frankincense, and myrrh.
I'd like to describe to you what most scholars considers to be the reason WHY they KNEW to come and do this. No-one else came, no other long list of foreign kings and dignitaries came. So why did THESE men come? The gospel text tells us that these men came because they saw the star (Mt 2:2). And yet, EVERYONE would have seen the star, but only these few knew what the star meant?
Why?
They knew because they had been attentive and listened to other things that the Lord had said. But what?

The two things we know about these men are that they were from “the east” (Mt 2:1) and that they are called “magi”, which doesn't mean so much ‘magicians’ as ‘wise men’ of the religion of ‘the east’: magi of the the pagan seer ‘Zoroaster’.
As we know, God had been preparing His Chosen people, the Jews, for His coming as the Messiah, for His birth.
But, God had also been preparing other people to come to recognise this Jewish Messiah, recognise Him because He was to be the saviour of ALL peoples. And, one of the ways He prepared others to recognise this Jewish Messiah as their Messiah too was in a prophecy made by the pagan seer Zoroaster. Zoroaster said, as we can read in their pagan texts,
“A VIRGIN will conceive and bear a son, and a STAR will appear blazing at midday to signalise the occurrence… When you behold the star follow it… Adore the mysterious child, offering him gifts with profound humility” (the magi Zoroaster).
And so, they saw the star, they brought gifts, and they did homage.

We can note this as an example of the Christian claim: there are elements of truth in other religions, but they are only verified as true in as much as they lead to the FULLNESS of truth, lead to Him who said He was truth itself: “I am the way, the truth, and the life”(Jn 14:6).

So, these wise men came. But they only were able to do what they did because they were attentive to what had been said. If they hadn't been attentive then they would have been like everyone else and just seen a star without knowing what it meant.
We might make a comparison with the the other small group that the gospels record as having come to do homage to the baby king of the Jews: the shepherds (Lk 2:15-16). They also had heard a message, from angels. They too listened and obeyed.

Let me close by applying this to ourselves.
We, too, have heard a message from God, handed down to us in the Scriptures.
We, too, can choose to either be too busy to pay attention (like those who saw the star but didn't know what it meant),
Or, we can be attentive to the call of the Lord, come to Him, and find joy in worshipping Him.
He is the fullness of what we are yearning for. And we can find it, and find joy in it, if we are just attentive to what has been made known.
“Magi from the east came to Jerusalem and asked, ‘Where is the one who has been born king of the Jews? We saw his star when it rose and have come to worship him.’ ”(Mt 2:1-2)
Posted by Fr. Dylan James, Catholic Priest, dual American-British citizen at 00:30