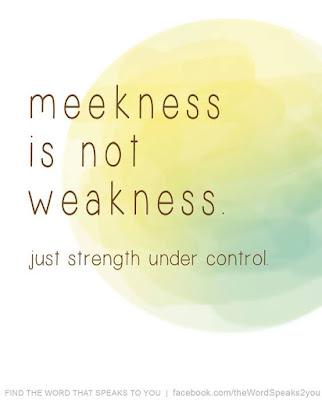 I want to make a simple but significant point today, to point out that humility and meekness is not about being a wimp.

We just heard the Lord Jesus tell us that we should “learn” (Mt 11: 29) from Him, and it is often noted that this is the only place in ALL of the Gospels where we hear Him tell us to "learn" directly from His example.
And the thing He tells us to learn from His example is His meekness and humility.

Now I just said that meekness and humility is not about being a wimp. And this is something we see in the Lord Jesus when we look at how He lived. He was quite capable of being strong when it was appropriate:
He rose from the dead,
He healed the sick,
He raised Lazarus,
and, perhaps more significantly, He drove the moneychangers out of the Temple -He manifested in that action a holy anger, a holy zeal, not to defend Himself but to defend His “Father's house"(Jn 2:13-18).

And yet, this Lord and Messiah, who was capable of being strong when He needed to be, was also willing and able to DEFER to the needs of others, to put others before Himself.
Allowing Himself to suffer and die for our salvation meant humbly and meekly putting others before Himself.
That took strength.
And every action that chooses to not be selfish but put others before ourselves, every such action requires strength
-a strength that we do not have of ourselves but that is we can have by calling on His grace.

Being humble and being meek requires strength on our part, and this is the example that our Saviour has left us:
“Learn from me for I am meek and humble of heart"(Mt 11:29)