He Practiced what He Preached, 31st Sunday Ordinary Time Yr A 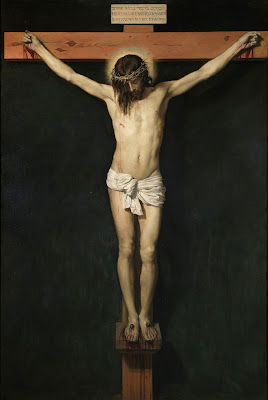 Mt 23:1-12
Today I’d like us to consider WHO it was that truly “practiced what He preached”.
The phrase, “to practice what you preach”, is one is one of those that everyone still knows today, even though they have forgotten the Jesus who first coined the phrase.
My point to you, today, however, is that the Lord Jesus truly DID practice what He preached, and I’d like us to consider just a few examples of that.

He taught that we should pray.
And the Gospels record that He prayed: waking early before His disciples and ascending the hill to pray; going to the Temple and the synagogue to pray.

He taught that we should hunger and thirst for righteousness (Mt 5:6).
And He hungered for it so much that He reached down from heaven, became one of us us, and sought out the lost (Lk 19:10).

St Thomas Aquinas remarks that we see this especially upon the Cross -the Cross is the model of every virtue:

He reaffirmed the 4th commandment to honour our mother and father (Mk 10:19).
And as He hung upon the Cross He cared for His mother by entrusting her to St John (Jn 19:26).

He taught that we should trust our Heavenly Father, who cares for the lilies of the field and the birds of the sky, and much more for us (Mt 6:26).
And as He hung upon the Cross He entrusted Himself to the Heavenly Father saying, “Father, into your hands I commend my spirit”(Lk 23:46).

He taught that we should turn the other cheek when we are struck (Mt 5:39), and when Annas’s soldier struck him He simply took it (Jn 18:22).

He taught that, “Greater love has no man than that He lay down his life for his friends”(Jn 15:13), and He DID lay down His life for us -even without us having proved ourselves worthy of being called His “friends”.

(pause)
How might we sum up everything He did?
We might remember that the crowds said of Him, “He has done all things well”(Mk 7:37).

How might we sum up the effect of His teaching?
We might recall that the first time soldiers were sent to arrest Him they returned empty-handed, they returned to their masters and said simply, “No one has ever spoken like this man”(Jn 7:46).

Why did His teaching have such an effect on the people? Because He practiced what He preached.
And He calls on us to do the same: To preach what He preached; and, to live as He lived.

To conclude, He is thus the ultimate teacher, the ultimate “rabbi”.
And though the Church has never taken the second half of today's Gospel literally: we call our earthly teachers, “teacher”, and our earthly dads and priests, “father”, nonetheless, none deserve these titles as purely as Christ did -which is what the Lord is indicating in this text.
He practiced what He preached.
Posted by Fr. Dylan James, Catholic Priest, dual American-British citizen at 00:30