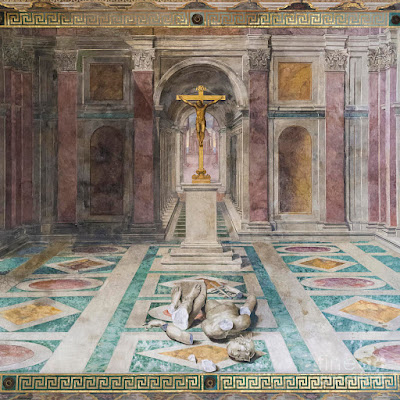 1 Thess 1:5-10
This week, as I think most of you know, was the parish youth pilgrimage to Rome. We saw a great many things, and on their behalf I’d like to thank you all for your generosity in subsidising it with your donations.
Today I want to to illustrate our second reading by referring to some of what we saw in Rome.

As Catholics we associate Rome with the Pope, but this wasn’t the original Rome. Ancient Rome was pagan, worshipping almost countless numbers of pagan idols.
Pagan Rome did not welcome the early Christians. Two things about Christianity threatened pagan Rome:
First, the absoluteness of Christ’s claim: there is only ONE god, not many; that He is “THE way, the truth and the life”(Jan 14:6), not just one way among many. In contrast the Romans had lots of little competing gods.
Second, the LIFESTYLE of Christians repudiated that of the Romans. The Ancient Romans lived a life of self indulgence and debauchery. The rich banqueted with vomitoriums in their halls, so they could empty their stomachs and continue to practice yet more gluttony. Sexual orgies were likewise a major part of their culture, with contraception, abortion, and leaving unwanted infants to die on the hillsides.
The Christians came with a new way of life. Early records, from the pagan Roman themselves, state that it was the lifestyle of the Christians that converted many. The Christians rescued unwanted infants left to die, fed the poor, cared for the elderly. They did not serve the idols of food, sex, or wealth, or the statues of the pages gods associated with them. As we heard St Paul refer in our second reading, “you broke with idolatry when you were converted to God and became servants of the real, living God”(1 Thess 1:9).

Such a contrast was not welcomed by the imperial powers of Rome. Nero burnt the Christians at the stake, Diocletian fed them to the lions, and this pattern continued for centuries. Our youth group saw the site of the huge Circus Maximus where most of those Christians died, the awesome spectacle of the Colosseum where many others were put to death, and saw the remains of the mighty pagan temples on the Via Sacra.
The might of Ancient Rome bore down hard on the early Church.
And yet more and more of them converted to Christ.
And the might of pagan Rome fell. Circus Maximus is just grassland now. The marble of the Colosseum and the pillars of those temples now adorn the churches of the living God.

There is a painting we saw in Rome that symbolises this change. On the ceiling of the Constantine room in the Vatican Museum is a painting that shows a pedestal that had held a mighty pagan idol. The idol is smashed and discarded on the floor, and in its place stands a humble image of Christ, Christ on the Cross. The truth that is Him, and “the sort of life”(1 Thess 1:5) He teaches us, swept aside all that went before Him AND all that has come after.

The Church is the oldest institution in human history. It has seen empires come and seen them go. Napoleon invaded Rome, and he is gone.
Stalin mocked “the divisions” of the Pope, and the Soviet Empire is likewise no more.

The Church is the Body of Christ.
The Church endures because what Christ offers is ETERNALLY significant.
Let me close by noting, however, that the clash between the idols of the world and the God shown in Christ, the humble other-worldly values shown on the Cross, that clash against the idols of self-indulgence, of food and sex and comfort, that clash is alive again in our era today.

The Church will endure because Christ promised it, “until the end of time”(Mt 28:20).
But whether you and I endure with it, whether England endures with it, is a choice we need to be a part of.
Do the words of St Paul to the Thessalonians also apply to us? “You have been converted from idolatry to serve the living God”(1 Thess 1:9).