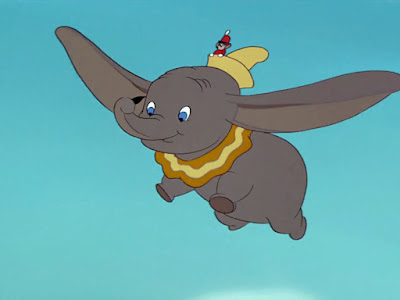 There are always a lot of films on TV over Christmas, and one of my favourites is on this Christmas afternoon (4.30pm on Channel 4): the classic Disney movie “Dumbo”, described in many reviews as “a heart-warming tale”.
For those of you who can’t remember, it’s about a baby elephant who wants to fly, and learns that it CAN fly if it just believes it can, and flaps its ears. Victory over the impossible by having faith.

And I note this because many people think that Christmas is like that:
A lovely heart-warming tale. But no more true than elephants being able to fly.
In fact, a recent survey showed that the majority of people in our nation, tragically, believe that Christmas is little more than a fairy tale.
My point to you today, however, is that we’re NOT gathered here just because of a STORY.

Now, this said, it’s true that even as a story, Christmas IS certainly a heart-warming tale –all the images of the Christmas accounts make up a good story:
Mary and Joseph struggling to find a place to stay, finally being welcomed into someone’s stable, with the cattle lowing.
The angels appearing to the shepherds to tell them about the new-born baby boy.
The star appearing and guiding the three wise men from the East to come and worship the little boy.
It’s natural that children should hear and understand this tale; natural that Christmas should be especially a time for children.
The Christian story has often been referred to as “The Greatest Story Ever Told” -and it is.

The REAL reason that Christmas is The Greatest Story Ever Told is that it’s TRUE. And not only is it true, but in hearing it we recognise the elements that can show us what we’re truly looking for as human beings.
In the long prophecies of the Old Testament, we hear of how the Jews were waiting for a Messiah
–just as each of us are always longing for something more in life.
In the many miracles and signs we hear of the sort of clear and definite guidance that we all want in life –don’t we all want a star to point us in the right direction?
In the humility and weakness of the little child’s birth we hear an echo of how each of us knows that we are weak, not as strong as we would like to be.
In the struggle against the wicked King Herod, and the rejection when there is no room at the inn, we see our own struggles in life –and we hear that this child is at one with us in them.

Despite the scoffing of unbelievers, the Gospels are one of the clearest and most historical of all written records:
They record huge wonders with mild understatement -the way you record facts not fairy stories. Even Jesus’s enemies acknowledged the miracles and proofs He worked.
And His greatest miracle was to fulfil His promise to rise from the dead –He said He’d do it and He did. Not just a heart-warming tale but a work of power and wonder.

It may be that you have come here tonight thinking that Christmas is exactly like the Dumbo movie:
you like them both, but you think they are both just heart-warming tales.
If so, I urge you to think again.
Can I urge you, in particular, to come along to the Alpha course that we’ll be running here starting this January:
Take one of the free books, ‘Rediscover Jesus’ by Matthew Kelly;
Take an invite to our Alpha sessions: a free supper, a video each night, and a chance to discuss it.
There are many facts of history that can only be adequately explained by accepting who Jesus claimed to be.
There are many longings in the human heart that can only be satisfied by acknowledging the identity of the child whose birth we celebrate today:
No ordinary child, but rather, the Lord God himself come as one of us.
Not just a tale, but the truth that all creation has been longing for.
“The people that walked in darkness has seen a great light… unto us a child is born, unto us a son is given”.(Isa 9: 2; 6)
Posted by Fr. Dylan James, Catholic Priest, dual American-British citizen at 00:30