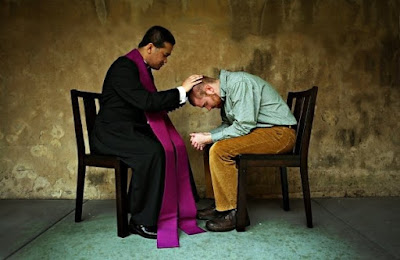 Mk 1:1-18; Isa 40:1-5.9-11
We’re now at the 2nd Sunday on Advent, the second week of preparing for the coming of the Lord.
Today there is one specific thing I want to talk about in terms of preparing, namely, our need to go to confession before Christmas. And I thought I’d talk about this by telling you some of the reasons why I, personally, go to confession.

The first and simplest reason why I go to confession is because I realise that there is something wrong between the Lord, and me, something that is not to do with Him, but to do with me.
And I want to put that right.
I know that even after going to Confession I fall again, and again.
But I also know that, again and again, I can be restored by the Lord, and start afresh.

A second reason relates very directly to Advent: I want the Lord to come to me more fully.
I hear the promises of the Lord, like in our first reading today, offering so much:
“Console my people, console them”(Isa 40:1)
-one of the most beautiful promises of the Old Testament.
-but I know that, so far, that consolation has only come to me in a very partial manner. I know that the Lord WANTS to come more, that His coming isn’t stopped by anything wrong with Him, its stopped by the SIN that is in me.
As a prayer at Mass this week summed it up, “our sins impede” His coming (Thursday of the first week of Advent).
Thus, in this 2nd Sunday of Advent, the Church always repeats to us the call of St John the Baptist:
“Prepare a way of the Lord, make His paths straight”(Mk 1:3).

Another reason I go to Confession is that I seek to rise above the minimum.
I sometimes hear people ask me, “How often to I HAVE to go to Confession?”
Are we only interested in what we HAVE to do? With the minimum?
Rather than with what is GOOD to do?
If a man asked, “What is the minimum I need to do in order for my wife not to leave me?”
-he clearly wouldn’t love his wife much
Yet, this can so easily be our attitude to God: the minimum.
If you seek the minimum:
Church law REQUIRES that you go to Holy Communion once a year, at Easter, and that with this that need to confess once a year.
The Church RECOMMENDS much more: monthly confession, frequent Communion.
As our last Bishop (Christopher Budd, 1998 pastoral letter) put it: It’s not enough to go to confession just at Advent and Lent, we need to go regularly.

Love does not seek the minimum.
Love seek to do MORE.
Love seeks to look within my heart and find the wrong that is the opposite of that “more".
If you look at the examination of conscience inside the newsletter you’ll see a list of the 7 deadly sins, and many others sins that flow from them. Such an examination seeks to help us rise above the minimum, seeks to helps us rise to the demands of love.

A final reason why I go to Confession:
I know that it is part of God’s plan to work THROUGH other people, through His Church, through His priests.
He said, “He who hears you hears me”(Lk 10:16), to His apostles, the first priests.
He said, “Those whose sins you forgive, they are forgiven them”(Jn 20:23), to His apostles the first priests.
And He knows that I need to hear those words of forgiveness, “I absolve you…”, not as some words on a print page of the Bible, but by His living representative on earth: the priest.

The history of the Church is full of holier men and women than me, men and women who knew their sins and knew their need of confession, even better than I know it.
Pope Francis, like his predecessors, tell us he too goes to confession. He says, "How good it feels to come back to Him whenever we are lost!"(Evangelii Gaudium n.3), to know the JOY of the "encounter"(n.1) with the Lord in this way.

I urge you, especially in this holy season, review your own practice in this regard.
Resolve to come to confession more frequently -times are listed on the newsletter.
And, especially, resolve to come before Christmas.
“Prepare a way of the Lord”(Mk 1:3).


+++++
The examination of conscience referred to in the sermon can be viewed at:
http://fatherdylanjames.blogspot.com/2009/03/examination-of-conscience-based-on-7.html