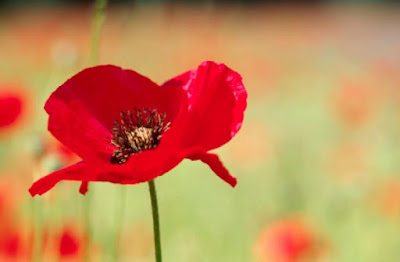 Mk 12:38-44; 1 Kgs 17:10-16
Today I'd like to reflect on the value that our actions have in God’s sight, which is often very different from the value our actions appear to have in the sight of the world.
Today, in our nation, is Remembrance Sunday, when we remember all those who have died in the wars of the past century. This year, 2018, we particularly are aware of it being the century of the end of the First World War.
Among the thoughts that can arise at such moments can be the question of what value sacrifices in war had. Pausing to see the value of deeds in God’s sight rather than our own can help to give us a most important perspective.

One way of considering the issue of the value of our deeds and the value of someone’s sacrifice would be to return to the ‘measuring’ criteria I have often referred to in my sermons:
the value that GOD puts on our actions depends on the LOVE with which we do them (c.f. St Thomas ST II-II q184 a1). And the love of family and love of country that motivate someone’s deeds in warfare is one way of considering their value.
However, most the time we can tend to want to evaluate actions in terms of their OUTCOME, their results, their consequences. The problem with trying to do this is that we can never see all the effects of our actions, so how can we make that the criteria for judging their value? The Scriptures give us another model, as we hear of in the two widows in our scripture readings today.

So, let us look at these two widows and evaluate their actions according to the two different criteria I mentioned: results, and motive.
Let us consider the first widow, who helped the prophet Elijah in the Old Testament. What were the RESULTS, the effects of her deed?
What she did, as we heard, was she chose to generously feed Elijah, even though she had so little food that she thought she was preparing a final meal for her and her son before they died.
The results, however, were very different. The ‘results’ were that GOD worked a miracle and rewarded her generosity by miraculously re-filling her “jar of meal” and “jug of oil” until the rains came and the drought was ended.
One point we can draw from this is that the PRIMARY agent acting in the world is the LORD. And He can draw great things even out of our small efforts.
AND He can do this, and does do this, even working in a world of suffering and evil.
So, we should persevere with our good deeds, even when we can't see what outcome they will have.

The second widow, praised by the Lord Jesus, is praised slightly differently.
We are never told the outcome of her deeds. What was her money used for after she gave it to the Temple? We simply don't know.
Nonetheless, the Lord praises her for her generosity, “they have all put in money that they had over, but she from the little she had has put in everything she possessed, all she had to live on”(Mk 12:44).
The Lord looks on what she has done and praises her, regardless of the outcome of her deeds, simply because of the good motive with which it was done.
God, likewise, will look kindly on us for good deeds that WE do with a generous heart.

So, to conclude, in whatever we find ourselves called upon to do in life, let us take these two widows as examples:
Let us give generously, doing the right thing, even when we cannot see the outcome. Because the value of our deeds, and the outcome of our actions, ultimately lies in the hands of God, who can do much more with our deeds than we can imagine.
Posted by Fr. Dylan James, Catholic Priest, dual American-British citizen at 00:30