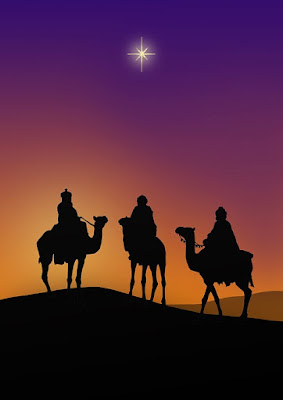 Mt 2:1-12
Today we keep the feast of the Epiphany, when we recall the ‘wise men’ who came from ‘the east’(Mt 2:1). Today, I’d like us to focus on the wise men themselves, and see what their behaviour might teach us.

First, let us consider WHAT they came to do.
As we heard them say to King Herod, “we have come to do Him homage”(Mt 2:2).
WE, in contrast, come from a culture when before we do anything we habitually are taught to consider,
“What’s in it for me? How will I benefit?”
They, in contrast, came from a culture where it was natural to give honour, “homage”, to others.
They WANTED to do this.
They would have no expectation of benefit to themselves -it was foreign king, in a foreign land -but they felt it was right to honour Him, and so they came.

Second, let us consider WHY they came.
Again, the text told us, “we saw his star as it rose”(Mt 2:2).
Let me point something out to you:
millions of people would have seen that same star, but only these three men knew what it meant, only these three men came.
Why did THEY know?
They knew because they were attentive: they were looking, they were listening.
They were looking at the stars.
They were listening and reading the SCRIPTURES.
As I’ve noted in previous sermons on the Epiphany, they were from “the east” (Mt 2:1), they were called “magi”, meaning ‘wise men’ of the religion of ‘the east’: magi of the pagan seer ‘Zoroaster’. And they were attentive to his prophecy that,
“A VIRGIN will conceive and bear a son, and a STAR will appear blazing at midday to signalise the occurrence… When you behold the star follow it… Adore the mysterious child, offering him gifts with profound humility” (the magi Zoroaster).
And so, they saw the star, they brought gifts, and they did homage.

Third, let us consider WHO they listened to. I said they were attentive, I said that it was only because they were attentive that they knew what the star meant. But WHO were they attentive to?
Who ruled Palestine? The Romans.
Yet, the Magi didn’t go to the Romans, they went to the JEWISH authorities. Tales of the expectation of a JEWISH Messiah had spread through the region and the east, they thus came to see, as they said, “the infant king of the JEWS”(Mt 2:2).
And even though Herod was a wicked king, he was a JEWISH king, and so he was able to refer them to the JEWISH Scriptures and the prophecy that he would be born in Bethlehem (Mt 2:5-6).
They listened to the right people, and they thus came to the right place.

Finally, let me note their experience towards the end of this narrative: “they were filled with delight”(Mt 2:10).
Joy, as I have repeatedly noted before and will note again, joy is a typical fruit that we see produced in people who meet the Lord.
BUT not everyone experiences joy:
The Pharisees and Sadducees were filled with envy, and so just hated Him;
Pilate was too busy with his own concerns, and was just perplexed;
but to those open to Him, to those who repent of their sins in the wonder of encountering the-Lord-made-flesh, to those He brings joy.

To conclude, what do the lives of these ‘wise men’ have to teach us?
First, the need to be focused on giving, not receiving.
In particular, giving honour to God, and not asking whether we benefit from it, or whether it is easy
-it wasn’t easy for these men to travel over a thousand miles by camel.
Second, the need to listen to the right people.
If we are to understand God speaking in the events our lives, then we need to read the BIBLE regularly, and listen to God’s Church
-just as the wise men could understand the star because of their attentiveness to the right things.
Finally, the fact that meeting the Lord will bring us joy.
We should not serve God just because it benefits us,
BUT it does benefit us, and this gives us yet another reason to love Him.
All this is what we see in the lives of the ‘wise men’ who came from ‘the east’.