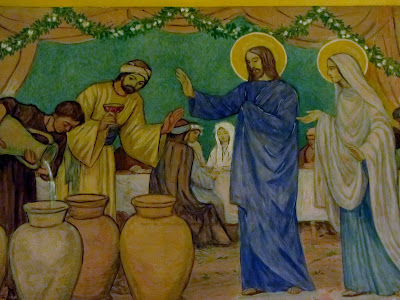 Jn 2:1-11
Today I’d like us to consider what God is like, to consider what God has SHOWN Himself to be like, and, in particular, what He has shown Himself to like as He relates to YOU.
It is the unique “arrogance” of the Christian religion is that we claim to know God Himself. We make this claim, not on the basis of what we have figured out ourselves, rather, we make this claim on the basis of what God has said and shown in Jesus Christ, we make this claim because we accept Jesus Christ.
The Lord Jesus has manifested, shown, what God is like.

Today, in our reading, we close a threefold epiphany, a series of three Sundays of epiphanies.
There is a great hymn, which sadly were not singing this year, “Songs of Thankfulness and Praise”, which recounts this threefold epiphany.
The word ‘epiphany’ means a manifesting, a showing.
We had the epiphany to the wise men who came from the east.
What did this manifest? It manifested that God’s plan included all the nations.
His plan was particular, in a single nation, the Jews -this is where and how He showed, manifested Himself.
But His plan reached out from that particularity to call all the nations, to call non-Jews like ourselves.

Then, last week, we had the epiphany at the baptism of the Lord Jesus.
At the Baptism the voice from heaven and manifested, “You are my Son”.
As I said last week, that showed God’s plan for us to become adopted children, to become “sons in the Son”, by becoming united to His only Son, Jesus.

Finally, today, there is another epiphany, at the wedding feast of Cana.
What did the Lord reveal in this miracle? Two things.
First, very basically, that He is a God of power.
He is not simply a source of wisdom, not just teacher of how to live, rather, it showed that He is active, He DOES things, as He DID something in that first miracle He worked at Cana.

There is, however, a deeper symbolism in this miracle, that our first reading points us towards:
Marriage as symbol of how God relates to us, of how God relates to YOU.
From before all time, God chose you.
From before all time, He called you and wanted you.
And the image He uses for how He desires you is MARRIAGE.
All religions across history have marriage.
But only the Jewish-Christian religion has this epiphany that marriage is a symbol of how God desires you and wants you, and wants YOU to want HIM.

This image is so important in the Bible that it occurs again and again in the Old Testament, and in the New.
The Jewish people, God’s CHOSEN people, were chosen by Him as a bridegroom chooses a bride.
But they were repeatedly unfaithful to Him.
They repeatedly sinned against Him, followed false gods, mixed a bit of true religion with a bit of worldliness, as we can try and try and mix worldliness with our following of Christ.
But the pattern of the Old Testament is that God was a faithful husband even when Israel was an unfaithful wife. He stuck with her, He allowed her to comeback, and come back, and come back.
And HE does the same for you and me.
We, like the wise men who came from the east, have been grafted into the Chosen people.
We, have this beautiful marriage image of how God has revealed Himself:
He loves you, He yearns for you, as a bridegroom for His bride.
Posted by Fr. Dylan James, Catholic Priest, dual American-British citizen at 00:30