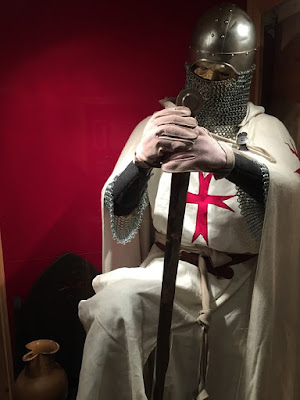 God has called me to greatness, to share in His glory.
This is His plan for me.
But to achieve this is not automatic, and is not easy.
A few weeks ago, I used the image of the athlete in training, as an image of the disciple seeking to be trained by Jesus -as an athlete is trained by His coach.
But our second reading today uses a different image:
The soldier.
The soldier also trains, is formed, and BECOMES something.
The soldier fights. You and I are called to fight.
The New Testament uses this image repeatedly, for example:
“be a good solider of Christ” (2 Tim 2:3); and “put on the armour of Christ”(Eph 6:11)
But WHO am I fighting?

Elsewhere in the New Testament our enemy, our threefold enemy, is spelt out repeatedly:
The world, the flesh, and the devil (c.f. Eph 2:2-3; 6:12; 1 John 2:15-17).
As a result of the Original Sin at the dawn of time, there is a disorder in the world and a disorder within each of us.
There is constant battle (Gal 5:16-17) within me between the greatness I could be and the fallen nature that pulls me down.
We cannot rise above this by accident. We must fight. We must strive.
The peace that the Lord promises (Jn 14:27) only comes as a result of the struggle.

Now, obviously, there is a problem here, in that often we don’t want to strive.
We want a comfortable Christianity, that can just recline in my armchair.
A lazy Christianity, that doesn’t need to do battle.
This is, however, a LOVELESS Christianity:
I fail to strive because I don’t LOVE the Lord enough to want to become what He asks of me.
That said, we don’t fight alone. It is His GRACE within us, strengthening us, enabling us to rise.

So, what must I do if I would strive, if I would be the soldier He calls me to be?
To come back to the issue of discipleship I preached on a few weeks ago,
I need to train, to be formed, to identify the enemy within me, to know how to fight Him, to know what WINNING looks like.
Our discipleship formation programme starts this Thursday, with sessions both in the morning and the evening.
We can’t expect to win the fight if we are fighting alone, if we are doing to no more than attending Mass each Sunday -we each need more. 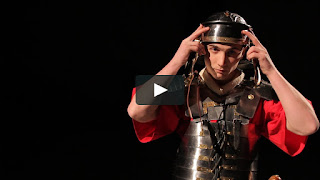 (pause)
When “at the due time” the Lord Jesus is revealed as “the King of kings and Lord of lords”,
when He who is now “in inaccessible light” appears in glory,
then, He will want each us to have fought so that we are fit to “take your place in the kingdom” (c.f. 2 Tim 4:18; Mt 25).
Let us not be afraid to get up and fight.
Posted by Fr. Dylan James, Catholic Priest, dual American-British citizen at 00:30