Sons in the Son, Baptism of the Lord, Year A 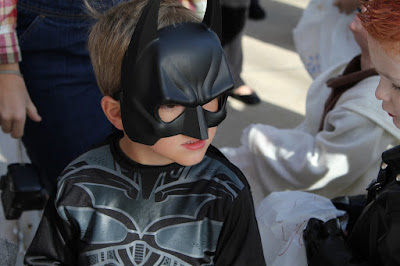 Mt 3:13-17
I’d like to share with you something I saw my little niece do, something that illustrated to me a point about identity –because today’s feast reminds us that our identity is revealed in baptism.
Many of us have been with family over Christmas, and seen little ones opening presents.
I was remembering how a few years ago, for Christmas, I got my two little nephews costumes to wear:
a Batman costume for one, and Darth Vader costume for the other, both kitted out from head to toe complete with masks and flowing capes.  And they were a big hit!
My niece was only two years old, and she didn't get a costume, but she observed the behaviour of her brothers quite closely, and when the opportunity arose she would grab bits of the costume to wear herself.
However, she hadn't quite grasped the significance of the different costumes, and so we were treated to the sight of a child in a Batman mask repeatedly making the sinister heavy breathing noises appropriate for the Darth Vader character in the Darth Vader mask.
She had failed to grasp the significance of the identity she was clothing herself in
–and this is the point I’d like to relate to today’s feast.
One of the mistakes we can make as Christians is to fail to accurately realise what is involved in the identity we have TAKEN ON as a Christian.
One of the things that today's feast of the Baptism of the Lord reminds us is that it was at His baptism that He was first PUBLICALLY identified, revealed to the world for His public ministry.
He had no need of baptism for Himself, as we heard Him and John the Baptist discussing,
and yet to fulfil "all righteousness", He chose to be baptised,
and when He did so the voice of the heavenly Father publicly declared, identified, who He was:
“This is my Son, the Beloved”.
There are many things that are important about Jesus Christ, there are many things that are part of His identity, but there is nothing that is as central to his identity as His one-ness with the divinity, as His being THE Son of God.
He is a descendent of David, He is a Jew, He was a carpenter,
but while these and other things were important, none of these or other things compares to the significance of His one-ness with the divinity, of His being THE Son of God.
Most of us here have been baptised, and in our baptism we have died and risen in Christ (Rom 6:4),
in our baptism we have gone down into the water, down into the tomb, and arisen to a new life and a new identity:
by baptism we have become “sons in the Son” (Eph 1:4-5; Gal 4:4-6; Rom 8:15-17, 22-23; 9:4),
by union with Christ we have become adopted children of the Father.
So, of the many things that identify ME, none are as important as this relationship I have with the heavenly Father due to my union with Christ in baptism.
I was born in England, the son of two teachers, I have blue eyes and light brown hair, but none of these things are what give me my REAL identity: I am a son of God, a son in the Son.
And yet, what ARE the things that we define ourselves by?  Usually?
All too often we define ourselves by things that are ultimately of little significance:
our appearance, our talents, our job, our money, our schooling, or some such thing.
But what TRULY defines my identity is my relationship with God.
All humanity relates to God as “Lord” -either accepting His Lordship or rejecting it.
But it is only those who have been ADOPTED, become “sons in the Son” in baptism, that have this as our identity.
And if this is our identity then it should PATTERN our behaviour, and DIRECT our hopes and longings:
“If then you were raised with Christ, seek those things which are above, where Christ is, sitting at the right hand of God.”(Col 3:1).
To come back to my little niece.  She didn’t know whether she was taking on Batman’s identity or Darth Vader’s.  If we know more than a 2 year old, then we need to recall the identity we have taken on:
We are “sons in the Son”.
Posted by Fr. Dylan James, Catholic Priest, dual American-British citizen at 00:30