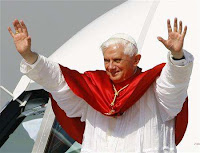 I want to say a few words about the Pope's visit to our country next weekend, I want to start doing so by making an analogy between the Pope and Moses -who we heard about in our first reading (Ex 32:7-14).
Moses was on the mountain with the Lord God, and, as we just heard, God is greatly displeased with the people he had “brought out of Egypt” because, as He told Moses, the people “have apostatised”(Ex 32:7). To "apostasize” means to deny your religion, and in the case of the people of Israel they had apostatised I no longer worshipping the God who brought them out of Egypt and instead making a golden calf and worshipping that. As one of the psalms puts it, “They exchanged the God who was their glory for the image of a bull that eats grass”(Ps 106:20). Moses pleaded with God to spare the people, and “so the Lord relented”(Ex 32:14), as we just heard. Moses then went down to the people carrying the tablets of the law (Ex 32:15). And, I imagine that many of the people were not pleased to see Moses again, they were not pleased to have the law brought to them. And yet, Moses went to them, Moses brought the law of them, because he cared for the people, and by his care he saved the people.

Now, it might be wondered WHY the Pope is coming to England. Certainly, there are many people who have warned him not to come, there are many people who have told him that he will not be welcome here. And the Pope knows this. Many people in the Vatican have warned the Pope not to come: but the Pope is coming because he WANTS to come, he feels he NEEDS to come, he knows that he has something that he needs to say to us - I do not know whether he will be saying that by what he does or what he says, or even merely by his presence -but I am sure that he is coming because he has a message for us.

The Pope receives invitations to go to many different countries, and his decision to accept the invitation of our government to come to Britain must surely be because he thinks Britain is an important place for him to come. And he does not think that we are an important place to come because he somehow mistakenly thinks we are deeply religious country that WANTS him to come. I think that it must surely be the opposite, he feels a need to come because he knows that Britain is NOT religious, he knows that Britain is one of the most secular countries not only in Europe but in the world. He knows that it is important that Britain acknowledge the Lord again, because many other countries, in different ways, look to Britain. By coming to Britain the Pope is coming to the centre of the secular versus Christian fight. Britain is a country and culture that has been trying to build a society without God: this does not mean that our people necessarily wicked or malicious, but they have been trying to live as if God was not there. By coming to Britain the Pope is trying to tell the people of our land that we would be happier, that we would be better, if we turned to the Lord.

For us, as Catholics, it is a great privilege for us to have the Holy Father come to England. The present Pope may not have some of the movie star charisma that John Paul II had. But his coming to England is important not because of his personality, but rather simply because of who he is as Pope: the fact that he is the successor of St Peter, the fact that he is the Vicar of Christ on earth. And it is a great blessing for us that he is coming, even if he comes in the midst of great hostility, even if he comes to be martyred by some Englishman.
For us, it is important not only that we support him in his task to remind our country of God, it is also important, for ourselves, that we make the most of this opportunity of grace: it is still not too late to decide to go to London and join some part of those cheering crowds that will greet him, or to stand along the road and cheer him as he goes by. But at the very least, let us take the opportunity to join with this visit in prayer, by watching him on the television, by praying with him as he comes to pray with us.