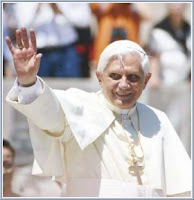 Lk 16:10-13
Contrary to fears, there have been huge crowds to great the Pope these last few days on his visit to Britain.
From our own parish: 5 young people were among the privileged few at the special youth gatherings with the Pope. 8 other parishioners are presently awaiting the Pope’s arrival for Mass in Birmingham. And yesterday, I was with 16 more from the parish who went to pray with the Pope in Hyde Park -all from sleepy little Shaftesbury!
I’m sure that most of you will have caught something of the atmosphere by watching on the television. But, I found myself surprised as I watched his arrival on Thursday, and even more when I was up in London, I found myself surprised at the emotion, the inner excitement and thrill that the visit has produced within me. I’ve seen the Pope before in Rome; I’ve shaken his hand; before he was pope I even had breakfast with him at the German college in Rome –he was actually not only very courteous but funny: he told a number of jokes, and I can remember thinking: here is a German with a sense of humour!
So, I’ve seen this man before, but seeing him come HERE felt palpably different. And meeting the man who was not-yet-pope is not the same as seeing the man-who-has-become-pope, who has become the Vicar of Christ on earth. And judging from what I saw of all the crowds in London, we all felt the same –no one even complained about the 6 hour wait after getting through security.

As I said last week, it’s a great privilege for us that the Holy Father is visiting our land.
And, it’s a great joy to see the crowds that have come to see him.
And hopefully that is something we feel at an emotional level as well as something we acknowledge with our heads.
But, the question I would put to you this morning is: will Britain heed what he has come to say? And will WE heed what he has come to say?

Today’s Gospel, by either providence or chance, gives us a text that pointedly focuses us on a major part of the Pope’s message to us:
“You cannot be the slave both of God and of money”(Lk 16:13).
And, ‘money’ here does not just mean cash –it means those things and that lifestyle that is rooted solely in the here and now.
The Pope has spoken very directly to us of the dangers of the secular society, of trying to build a world and a life as if God did not exist. I’d like to quote to you some of the Pope’s words, that he addressed directly to young people but hold for all of us in different ways by extension:
“I would like to say a word to you, my dear young Catholics of Scotland. I urge you to lead lives worthy of our Lord (cf. Ephesians 4:1) and of yourselves. There are many temptations placed before you every day -- drugs, money, sex, pornography, alcohol -- which the world tells you will bring you happiness, yet these things are destructive and divisive. There is only one thing which lasts: the love of Jesus Christ personally for each one of you. Search for him, know him and love him, and he will set you free from slavery to the glittering but superficial existence frequently proposed by today’s society. Put aside what is worthless and learn of your own dignity as children of God.” (Pope Benedict XVI, Glasgow, 16th Sept 2010)

Do we “put aside” what is worthless?
Do we, as Catholics, value things in a way that is visibly different from the rest of Britain?
Because, if we are not living differently from people who don’t believe in God,
if we value money in the same way as people who don’t believe in God,
then, what judgment do Christ’s words in the Gospel place upon us? “No servant can be the slave of two masters... You cannot be the slave both of God and of money”(Lk 16:13).

As the Pope said, it is “the love of Jesus Christ personally for each one of you” that lasts. And, if we are convinced of that truth then we should not expect to find our daily happiness in the passing pleasures of this world, but we should expect to find it in the love of the Lord.
Let us hope, and pray, that the visit of the Holy Father to our land will inspire not only the British people to think again about what the value, to re-discover the place of God, but make us think again too.
Posted by Fr. Dylan James, Catholic Priest, dual American-British citizen at 11:00