Centenary, Mass of Anniversary of Dedication of a Church, Shaftesbury 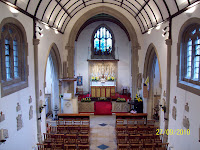 In the buildup to this centenary a number of people have been offering their memories of our parish history, and I was very struck by a recollection from someone whose family has lived here for many generations, someone who told me how his parents told him part of what it meant to be a Catholic here before the church was built, even before the FMI priests came here:
to be a Catholic here in Shaftesbury meant walking the 6 miles that it took to get to Mass in Marnhull –and they had to go to Marnhull because there was no Mass in Shaftesbury. And I think that memory alone helps illustrate what the building of this church was about:
the building of this church was about people who knew their Catholic Faith well enough, and valued what their Catholic Faith told them, to know that the Holy Sacrifice of the Mass was something worth making the effort for, and, worth constructing a building that would be set apart for the Mass.

But there is something else that a Church is, something that it is BECAUSE the Mass is offered here, and that something was echoed in two of the Scripture readings we just heard:
a Catholic church is the dwelling place of God –a place where we meet Him.
In our 1st reading (2 Chron 5) we heard of how the Temple of the Old Testament was built and how the glory of the Lord filled the Temple, the glory of a presence that was brought through the actions of the priests.
This happens even more fully in the dispensation of the New Testament:
In keeping with the command of the Lord Jesus that we “do this in memory of me”, when the priest repeats the words of Jesus Christ at the Last Supper, "This is my body... this is the chalice my blood", the promise of Christ comes true and He dwells among us: The bread and wine change and become His very self: His Body and Blood, His Soul and His Divinity.
And so, because the Mass is offered here, God dwells here in His tabernacle, as He dwells in the tabernacle of every Catholic church across the world.

This is something that we as Catholics value highly, and something that Catholics frequent suffer to acquire. Across the world today, and down through the years, Catholics have made many sacrifices to be with God in the Eucharist:
Today, in many parts of Africa or South America people walk long hours to get to Sunday Mass;
In our own country, in centuries gone past, during the Penal years when it was illegal to be a Catholic in this country, people made great risks to get to hidden Masses and to shelter priests who would then offer them Mass;
In centuries before that, when the Catholic Faith was first being established in this land, when King Alfred the Great was driving out the pagan Vikings and building the abbey here in Shaftesbury, to achieve that people made sacrifices by donating for the building and upkeep of the abbey;
Even before that, in the very beginnings of Christianity, we know from the first historical records of the universal Church that the first Christians set aside houses from the very beginning to be dedicated for the worship of God;
And, as we are commemorating today, when this church was built a hundred years ago, people sacrificed time, money, and work, that there might be a sacred place for the Mass, that there might be dwelling place of God among them.

But, my final point and concluding focus is to point out that God dwells among men, and we build churches that He might dwell in them, SO THAT He might then also dwell in our hearts.
As we heard in that 2nd reading, “You are God’s building”, you are His dwelling place.
The people who journeyed to get to Mass in Marnhull, the people who built this church, they did so in the hope that God would also dwell in them, with the resolution to make Him welcome in Holy Communion.

All of this leaves a legacy for us, and a call for us to put that legacy to good use: the example of our forefathers in the Faith should prompt us to seek to value the Mass more, to love Jesus in the Mass more. Last week, when Pope Benedict was here, he spoke repeatedly of the need to rediscover the place of God in society and in our lives. As we recall today what has been bequeathed to us in this sacred building, let us seek to value and love what they loved: to love the good God who dwells among us in the Eucharist.
Posted by Fr. Dylan James, Catholic Priest, dual American-British citizen at 00:12