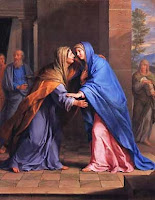 Lk 1:39-44; Micah 5:1-4
I’ve been sick most of the past week. I’m well now, so there’s no need for you to take pity on me. In fact, I had quite enough self-pity for myself that I’m not in need of any more to be given to me. “No one has ever had THIS bug”, “No one understands me”, “No one appreciates me”, “No one cares about me”.
Now, I’m sure that as I’m saying this some of the women here are listening thinking, “Oh, he just had a case of ‘man-flu’”.
While some of the men here are thinking, “Oh, it sounds like he had what I had”!

The thing, really, is that I want to say a word about self-pity, because it’s one of the things that can ruin Christmas. And, if we look to Our Lady, as we heard her described in today’s Gospel, we see her manifesting the very opposite of self-pity.
In today’s Gospel we heard the account of the visitation , of how Our Lady went to visit her cousin Elizabeth. This part of the Gospel occurred just after the Annunciation, and the chronology is something I want to draw your attention to: Our Lady had just agreed to the Archangel Gabriel’s request for her to become the Mother of God, she had just become pregnant by the Holy Spirit, and she’d been told as sign that her cousin Elizabeth was already pregnant with John the Baptist. The thing I want to draw your attention to is the way Our Lady responded, in action, to all of this. She was pregnant, yet she thought of someone else, of someone more pregnant that she was, her cousin Elizabeth, and she went to help her.

Now I’ve never been pregnant, for obvious reasons, but I understand that it’s a pretty good reason to be pretty concerned about your own health and condition –it’s even more serious than ‘man-flu’. Our Lady, however, thought of someone else, not herself. This attitude within her is what ushered in the presence of the Lord. When we’re all wrapped up in ourselves, in our self-pity (and we all have plenty of things of be self-pitying about ) when we’re all wrapped up in ourselves then there is no space for the Lord to enter. Our Lady was sinless, “full of grace”, she was NOT wrapped up in herself –and so the Lord came to her. And she brought our Lord to Elizabeth.

Let me point out another angle of this: Our Lady was full of faith, as Elizabeth praised her, “Blessed is she who BELIEVED that the promise made her by the Lord would be fulfilled”(Lk 1:44). To have faith means to accept what God has told us, what He has revealed. This LISTENING attitude is also something that involves us being ORIENTED towards another, rather than just wrapped up in ourselves. Our Lady listened to God’s Word and she believed. She would have listened to God’s Word in the Old Testament, in prophecies like the one we heard in our first reading, of the prophecy of Micah that a saviour would be born of the house of David, of Bethlehem. And so, believing this promise she had a context to be ready to understand and accept the further promise made by the Archangel that this would be fulfilled in her own time, in her.

We, ourselves, have many promises we have heard in the Scriptures. We too can decide whether or not we are going to be attentive to them, to listen, or whether we will be turned in on ourselves instead. Let’s take a simple promise like that of the Lord Jesus, “It is more blessed to give than to receive”(Acts 20:35, c.f. Lk 6:38). If we are remembering what Jesus said over Christmas, if we are filled with such faith, then we have yet another reason to be filled with looking at others and not just at ourselves in self-pity.

Our Lady was filled with joy, the next verse in today’s Gospel text has her call out the “Magnificat”. She was filled with joy because she wasn’t just filled with herself.
If we take her as our role-model, if we look to the needs of others over Christmas rather than just to ourself, if we listen in faith to the Lord to hear the deeper meaning of this season, then we too will know the TRUE spirit of the reason.