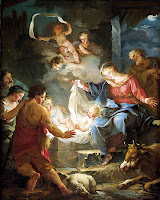 It’s my role to say a few words about why today’s feast is so important, to remind us about what it’s all about. And I want, today, to point out the question that today’s feast provides the answer to. And I want to do this with a summary of the key point that Pope Benedict starts his new book on The Infancy Narratives by addressing.

We keep today a feast that answers the question that was asked repeated when the baby whose birth we celebrate today was grown into a man. That man was not like other men. He was a preacher, but somehow noticeably different to other preachers. He had a wisdom such that people asked, “Where does He get it from?”(Mk 6:2) He was a miracle-worker, but not in the way that fakes or charlatans are. “He went about doing good”(Acts 10:38)
People asked the question, “Where are you from?”(c.f. Lk 23:6; Jn 9:29).
And this is the question that today’s feast answers.

The answer is twofold.
One part of the answer is that, as He said Himself, He is “not of this world”(Jn 18:36). He is the Lord God Himself, the one Son of the eternal Father, come down from heaven to earth.
But, the other part of the answer is that He is from a very definite place and time. Yes, He is God, but He is also truly human. He was born a babe in Bethlehem, of the House of Judah, of David’s royal line. The only son of the Virgin Mary. The timing of His birth is marked historically by the Roman census that brought His family to Bethlehem to be registered. These and many such details address the question, “Where did He come from?”
And these such details are what we celebrate in today’s feast.

There is another point at work here too. As the prophecy of Micah put it, prophesying of His birth centuries before it happened, this child is one whose “origin goes back to the distant past”(Mic 5:2).
We, in the 21st Century, might think of His past going back to His birth as a babe in Bethlehem 2000 years ago.
But the point about the prophecy of Micah is that His origin was something ancient long before that, His origin goes back to the promises of the Lord God, His promises that He would save His people.
And, today’s feast, in answering the question, “Where was He from?” points out to us that He is not some vague thing, some unknown thing, some mythical wish. Rather, He comes at a precise recorded point in human history. A point that changes human history –changed it even in the fact that we still measure time before and after His birth: BC or AD.
His coming changed history, as it had been prophesied that His coming would change history. And so this too answers the question, “Where did He come from?” Answer: His “origin goes back to the distant past”(Mic 5:2).

People today still ask about this figure “Jesus”, wonder what the fuss was about, is about.
The events of Christmas remind us WHO this figure is. He is God and man. He is the saviour sent to save us from our sins. He is the one who brings “peace to all those who turn to Him in their hearts”(Ps 85:8). He is so important that it still matters that we ask, “Where is He from?”
He was, and is, “not of this world”(Jn 18:36), yet we celebrate tonight that He has entered our world, that He has chosen to born as one of us, born a child in Bethlehem: Emmanuel, “God is with us”(Mt 1:23).
Posted by Fr. Dylan James, Catholic Priest, dual American-British citizen at 00:05