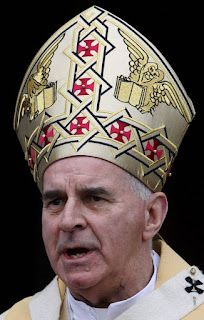 Lk 13:1-9
There have been two dominant items in the news this week for the Catholic Church in Britain. The resignation of the Pope due to old age and the resignation of the Scottish Cardinal Keith O'Brien for rather less honourable reasons. The resignation of the Pope was a glorious sight, with tremendous thankful crowds turning out to support him. In contrast, the resignation of the Cardinal has hit many of us hard, and I think I need to say a few words about it. We have children present so I won't mention the details. I hope, as I hope we all do, I hope the allegations are false. But there is a horrible scandal nonetheless: either he has done grossly immoral deeds, or the priests who have accused him of doing so have concocted a gross set of false allegations. Either way there is a public scandal. [Update: The Cardinal has now admitted to "sexual conduct ...below the standards expected of me as a priest, archbishop and cardinal."] Either way there is another example of what the now-abdicated Pope Benedict has referred to as “the filth” in the Church.

How should we feel about this? Well, maybe some of you feel tired at yet another media scandal story. More likely, you feel disgusted. We have been let down, others have been betrayed. You may also feel the taint and embarrassment of being associated with this simply by being of the same religion.

Many of the media reports have tried to create the impression that these events have caused a crisis in the Church, to say that these events are unparalleled. Sadly, over the course of the last 2000 years of the Church's existence these events are not unparalleled. Sin has ALWAYS existed in the Church. Our Faith tells us it will always be so, until the Lord comes again in glory at the End of Time. With this, there have always been at least some leaders in the Church, some bishops, who have been sinned.
Why, we might ask, why does God allow this? Why doesn't He just SMITE those who sin to stop them damaging the rest of us. Let me point out two parables of our Lord in this regard.

First, there is the parable of the wheat and the tares (Mt 13:24-30). i.e. of the weeds that grow up amid the good plants. In the parable people say to the master: tear up the weeds. But He says, no, if I do that I will tear up some of the good plants too. We might well ponder that if God wiped away all sinners then more than a few of US would be wiped away too. Wiped away before we have repented of various sins that we might otherwise repent of if we are given more time. So the Lord tells us that He, “the Lord of the Harvest” (Mt 9:38), allows the weeds and good plants to grow together, until the final harvest –when there will be a Judgement.
So the Lord does not purge His Church, He is patient. Following His example, the Church only purges very carefully –BUT she does act. In the light of recent events a Vatican official pointed out this week that, during his 8 years as pope, Pope Benedict had removed an average of 2-3 bishops a month in similar circumstances. So if the media try to create the impression that the Church has not been moving then it’s simply not true. The Church acts carefully, but she does act.

Second, we might look at today's Gospel text (Lk 13:1-9), which gives us an image of the Lord's patience in waiting for good growth to come out where none is yet growing. He tends the plant some more, gives it manure and time, and hopes it will bear fruit. He is patient with us.
The Lord's words in today's Gospel suggest that people were coming to the Lord and referring to the destruction that had come upon these people in the tower of Siloam and who had been slaughtered by Pilate. They seemed to think that these things had happened as a punishment for their sins. The Lord Jesus, however, turns that around, and warns His listeners that they too are sinners, and two times He says, "but unless you repent you will all perish as they did". These are harsh words. Very harsh.
But as we think of the sins of others we'd do well to remember these words ourselves, especially in this Lenten season when we have a particular call to repent, a particular call to take up, as our Collect (opening prayer) at Mass today repeats to us, to take up the three remedies of "fasting, prayer, and almsgiving".

To conclude, this recent scandal should shock and disappoint us. Let us do two things with that disgust.
First, let us pray for a strong and worthy new Pope to cleanse the Church.
But, second, let us also turn that disgust with sin inward and ask the Lord to help us turn from our own sins –those sins disgust the good and pure Lord even more than we are disgusted with the sins of our fellow man. And let us ask Him to renew our Lenten resolutions, our Lenten "fasting, prayer, and almsgiving", that what we despise in others we will not find in ourselves.
Posted by Fr. Dylan James, Catholic Priest, dual American-British citizen at 00:05

Thanks so much for commenting on this. I've been looking for a sound priest's advice/perspective on the O'Brien tragedy, and it is especially meaningful coming from a priest in the UK. Thank you, Fr. Dylan! God bless you and I pray your Lent is fruitful. Your homilies give great hope, thank you for posting them.