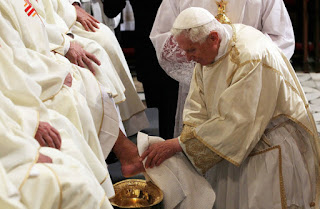 Jn 13:1-15
We've all heard a good number of things about our new Pope by now, and one of the things that has been repeatedly reported by the press has been his washing of feet. It is an ancient Catholic practice to have heads of religious communities go around their community on this day and wash the feet of those they are head of, to symbolise that their headship must also be service -if it is to be a manifestation of the headship of Christ. When he was an Archbishop the pope manifested this by going to wash the feet of AIDS patients, and on another occasion the feet of pregnant women and new mothers. And this evening he is doing so at the juvenile prison 'Casal del Marmo' in Rome (the same facility visited by Pope Benedict XVI in 2007). He did this, and is doing this, manifesting headship as service. More recently, in his homily at his installation Mass, you may have heard the new Pope speak of this when he preached about how the role of the Bishop of Rome is a role of power, but power exercised as service. This must hold for any Christian leader, if he wishes to manifest headship as that of Christ, be it in a church, a family, a school, or any Christian group.

I wish tonight, however, to speak about something else. Not about how a Christian leader is called to serve (I've preached on that point in past years), but about what this action of Jesus tells us about how HE relates to US.
The Gospel text that recounts this event, of Him washing the feet of His apostles, says that He did this "showing the depth of His love"(Jn 13:1). But for us to appreciate quite HOW deep this love is that was manifested in this act we need to recall the rest of the context.

Let us first recall the most basic context: WHO is it that is washing the feet? If we view this account as merely a human event we will miss what is really significant. The "who" who is acting here is GOD. God has come down from heaven to earth, came down and washed our feet.
This tells us something incredible about the nature of God Himself. And it is very different from so many non-Christian notions of God. The pagan gods were typically viewed as remote and detached from us, uncaring of us, toying with the mere mortals they looked down upon. The gods of the philosophers were less malicious, but they were cold and uninvolved in human affairs. In contrast, the God revealed by and in Jesus Christ is a god who comes down and washes our feet.

The act of loving service that is manifested in this act is part of a threefold act manifesting His care and involvement in our affairs. It is coupled with His gift of the priesthood and the Mass -these are the two things, in the sacramental economy, that are the mechanism by which He stays with His chosen people all down through the centuries until the end of time. I.e. He not only cares enough to come down and be involved with us washing our feet once, but He STAYS with us. And the vulnerability He leaves us with in the Eucharist, by which men in every age will ignore Him, disrespect Him, abuse Him, this vulnerable commitment to stay with us is all part of this same loving service in washing our feet.

And, of course, the priesthood of the Mass that He gives is the continuation of that other part of the threefold gift, namely, His gift of Himself in the sacrifice of the Cross. The Cross on which the Lord allowed Himself to be abuse and forsaken for our sakes.

So, to conclude, the act of His washing of the feet, it shows us something about Him, shows us about how God cares for and enters our world. This is the sort of God we worship, this is the sort of God who has made Himself known: He dies for us on the Cross, He remains with us in the Mass, and He comes down and washes our feet. This is what God is like.