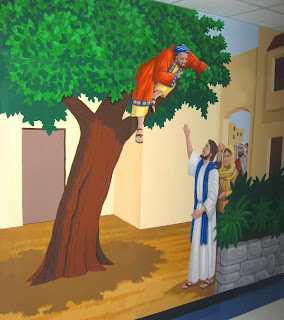 Lk 19:1-10
We just heard the Lord Jesus make a rather important statement about WHY “the Son of Man has come”(Lk 19:10). If you recall, the title, “The Son of Man” is one that Jesus had applied to Himself as one of the titles used of the long-awaited Messiah, the one who was to SAVE the Chosen People. The name ‘Jesus’ itself means “The Lord [YHWH] is salvation”[1], and we heard in that passage the Lord say that “salvation has come to this house” of the tax-collector Zacchaeus.

Jesus comes to bring salvation, and He says salvation has come to this man, but, WHAT is this thing called ‘salvation’?
You may recall that last year Pope Benedict came out with his last book, The Infancy Narratives, and in that book he commented on this very question. And he noted that for some of the people, what Jesus claimed to bring seemed too much, and to others it seemed too little. But in either case, it was not the ‘salvation’ they were expecting.
Jesus came to save us from our sins, whereas many of the Jewish people were expecting a this-worldly salvation, a political messiah to liberate them from the Romans. Such people were disappointed that Jesus was offering something else.
Others, the Pharisees and Sadducees, heard what Jesus claimed but thought it was too much, because only GOD can forgive sin, so who was Jesus claiming to be? [Well, He was claiming to be God.]

Pope Benedict commented on this issue of the type of salvation that Jesus came to bring by commenting on the occasion when some people brought a paralytic to Jesus and lowered him down to Him through the roof. What did Jesus say to the sick man? “My son, your sins are forgiven”(Mk 2:5). As Pope Benedict noted, “This was the last thing anyone was expecting [Jesus to say]. This was the last thing they were concerned about. The paralytic needed to be able to walk, not to be delivered from his sins”![2]

Yet, this is what Jesus claimed to be about: the forgiveness of sins, the saving of us from our sins, and this was a deeper and more profound healing that that of the body from illness.
Thus, Zacchaeus, who was physically well, and materially rich, he still NEEDED saving. And it was only because Jesus ‘sought out’ this man declared to be a “sinner”(Lk 19:7), and that this sinner likewise sought out Him and welcomed Him into his home, that Jesus was able to say, “salvation has come to this house”(Lk 19:9).

Still today, however, many people think this too little a thing. Still today there are people, and let me be blunt and say especially the wealthy, still today there are people who value the body and material welfare in a manner that declares ‘sin’ to be something not really to be what Jesus is about. And they re-make Jesus into another image by ignoring these and other passages of the Scriptures.
But WHY is being saved from sin the most important thing? WHY is it the greatest salvation Jesus comes to bring? To quote Pope Benedict again, because “man is a relational being”[3] and our “first, fundamental relationship” is with God our creator, and as long as this relationship is disturbed all my other relationships are disturbed too. I cannot properly love my neighbour, who is made in God’s image, if I am out of kilter with God.
Sin is the heart of the human sickness and if we are not healed in this then “no matter how many things you may find, you are not truly healed”[4].
And, conversely, when we ARE saved from sin, saved in this deepest relational core of our being with GOD, when we are saved here it brings great JOY. Thus, as we heard, Zacchaeus welcomed Jesus “joyfully”(Lk 19:6), as joy accompanied the forgiveness of sin elsewhere in the Gospels too.

So, this is the greatness of what Jesus comes to us to bring. To put us at right in the core of our being.
It was for this that He came, it was to achieve this that He died, and it is still today for this that He “seeks out and saves that which is lost”