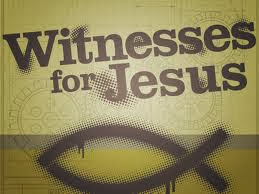 Lk 21:5-19
This week our Diocese had a major gathering, a 'symposium', on what is called 'The New Evangelisation’ -concerning our need, as believers, to give witness to the people of our modern secular society. The call to give witness runs repeatedly through the Scriptures; and in our Gospel today we heard what might seem an unlikely example of it: the Lord Jesus said that when believers will be persecuted at the End of Time, in trials, and brought before their persecutors, this will be "an opportunity to bear WITNESS"(Lk 21:13).
But, to WHAT are we to give witness? Or, rather, to WHOM?

Bearing witness is all about HIM. The symposium was looking at a document of the 2012 Synod of Bishops on Evangelisation, it's Instrumentum Laboris, which talks in its introduction about what the whole thing is about, which can be summed up in three points:
It's about (1) having "a personal relationship" with the Lord, a relationship with Him that begins when (2) someone proclaims Him to us in such a way that we can say that (3) we truly MEET Him, "encounter" Him (nn.17-18; Introduction). This parallels the manner in which we meet anybody, encounter anybody, get introduced to anybody, and thus start to have a relationship with him/ her.

It may be that to some of you the language of "having a personal relationship with Jesus" sounds foreign, sounds like American terminology imported from Evangelicals. Certainly, for myself, as a teenager, it was from such people that I first came across this phrase. But, as a matter of fact, it is common in the documents of the Catholic Church, rooted in our tradition; and the entirety of everything we believe as Catholics, from the personal love of Jesus for us in the Sacred Heart, to the motherly care bestowed on us by our Heavenly Mother Mary -these and countless other things are only coherent as part of a Faith that believes in "personal relationship" with the Lord.

Let me make the point using another term: 'friendship', countless ancient devotions remind us that Jesus is our ‘friend’; theologians like St Thomas Aquinas tell we must listen to Him because He is our “best and wisest friend” (ST I-II q108 a4). And, mystics like St Teresa of Avila, in describing what prayer is, says: “it is nothing but a frequent heart-to-heart conversation with Him by whom we know ourselves to be loved”.
He is a friend who transcends all others, in a friendship, a personal relationship that transcends all others. He loves me, He forgives me, He strengthens me, He consoles me.
He is with me: in prayer, in the Holy Mass, in Holy Communion.
He is with me in the way my neighbour loves me, and in me when I love my neighbour.
He, like all friends, is with me in my joys, and shares my rejoicing.
And, even better than any friend, He is with me in my problems, so that I do not bear the burden alone -even if my problems are not the tribulations of the End Days.
The friend I can talk to about my whole life, who listens; and, if I am sensible, the friend whose wise advice I listen to hear.
Finally, He shows His perfect friendship in the way that He is with me even though I am so often only imperfectly with Him. He is my best friend even though I am not faithful enough to say the same for Him.

To have such a friend, to be in such a wonderful "personal relationship", is a beautiful and precious thing.
If we have such a thing, even if we only have it imperfectly, if we have such a thing we surely need to want others to have it.
And it is for such a sharing that we are called to "bear witness"(Lk 21:13).

You can't force someone to come to faith; just as you can't force someone into a friendship. But, by presenting Christ to others we create a situation where that initial "encounter" with Him, and sometimes a re-encounter with Him, becomes possible. We have a duty to give people this possibility, and to do it often. The Church teaches us that the PRIMARY duty of charity is to proclaim Christ to others (Novo Millennio Ineunte n.50): Others deserve too have this friend too.
To close with a quote from a saint who lived through the Reformation persecutions, who stood before trials and sufferings such as those Jesus described in the Gospel: how do we describe Jesus?
"First friend He was,
Best friend He is,
All ages will find Him true."(St Robert Southwell)