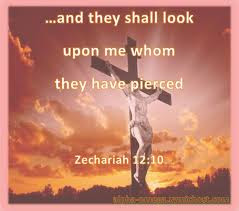 Zechariah, the text of our first reading, is one of a number of Old Testament prophets who spoke of. The promise of a new outpouring of the Holy Spirit. We, as Christians, can easily fail to appreciate the significance of this, so, one of the ways we can grasp its significance is by realising where prophets and the Spirit stood at the time of the Lord coming.
The point is this: there were no longer any prophets.
There had stopped being prophets many centuries before.
The Spirit was no longer being given to anyone to anoint them to be prophets.
The entire Jewish people was thus is a state of WAITING for the future time, the time that had been promised when there WOULD be prophets, the new time of the Spirit and prophets.
The people were waiting for One who would come.

So, Jesus.
The title, “Christ”, means, “anointed” –one anointed for His role, His role as the One they were waiting for.
So, in our Gospel text, when Peter answers the question, “who do you say I am?” By replying, “you are the Christ”, Peter is calling Him the fulfilment of this Old Testament hope and promise.

The Lord was anointed, not with oil, like the kings of old.
The Lord was anointed with the Holy Spirit (c.f. Lk 3:16; 3:22).
This anointing with the Spirit makes Him the fulfilment, means that He ended that long period when there had been no prophets, been no outpouring of the Spirit.
And, as we know, He brought a new out pouring of that Spirit, to be spread more widely -not just on a few leaders, but on all His people, all who become His disciples.
He fulfilled the promise of Zechariah of the “fountain” (Zech 13:1) being “poured out”, of the Spirit (Zech 12:10).

(Pause)
Let me take that in a new direction: the Cross.
Anointing is always for a purpose, a mission.
The mission of Jesus Christ, however, was quite unexpected. As we heard Him say, it was for the Cross.
The same passage that calls Him the Christ, the “anointed”, is where He says His mission is to die.
The Saviour we are to look upon is one who was anointed to die, to die for us.

And, He is not only anointed to die for us,
in fact, we are the ones who have killed Him, by our sins.
As the text of Zechariah says, “they will look upon the one whom they a have pierced”(Zech 12:10)
–not the one someone else has pierced, but rather, I look on the one that my owns sins have crucified.
Yet, if I look at Him as my saviour, if I call upon Him as such,
if I seek to die with Him, and take up, as He calls me, my cross every day,
then I shall rise with Him too.
And the promised outpouring of the Spirit, on the One who ended the centuries of waiting, the centuries of there being no Spirit, He will strengthen me with that same Spirit too.
Posted by Fr. Dylan James, Catholic Priest, dual American-British citizen at 00:30