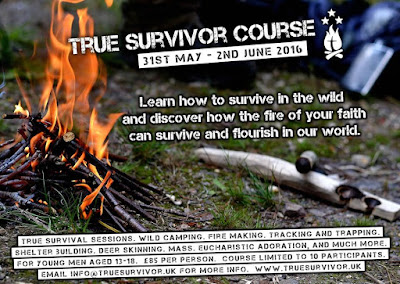 Lk 7:36-8:3
Last week, as many of you are aware, I was away, on what turned out to be the spiritual highlight of the year: I was chaplain to the True Survivor (see here and/or here)outdoor survival training course run by Will Hince. The course offered formation in Christian manhood, and with each survival skill that Will taught the young men he also gave them an analogy of the spiritual life, and it is one of those analogies I'd like to share with you.

In a later stage of hypothermia the person experiences disorientation and lethargy, they do nothing, they can also experience delusions.
Will described how his friend had stood motionless while he himself had wondered off ‘seeing’ a shelter that wasn't actually there.
In the life of sin, when we persevere in sin rather than repent of it and struggle against it, we can also experience delusion and lethargy. We can fail to do anything about our sin. We can tell ourselves that our sins aren't really sins, and aren't really important.

There is a final stage in hypothermia. The person stops shivering, stops feeling cold, but they are cold, and they die.
In the life of grace, in the struggle against sin, there also comes a stage when we become so complacent with our sin that we no longer shiver against it, it no longer makes us uncomfortable, we have lied to ourselves so long that we no longer feel there is a problem.
We tell ourselves, “I'm OK, I'm a good person”.
But grace has died with us, and we are indifferent to the fact.

When I heard Will relate that analogy of sin, the life of grace, and hypothermia, I could recognise myself and my comfort with various sins at different times in my life. I found it both enlightening and frightening.

In the Gospel today we heard a contrast of two different sinners: Simon the Pharisee, and the woman who anointed the Lord’s feet.
The woman, as the Lord noted, thought of herself as a sinner, and she loved the Lord much because the Lord had forgiven her much.
Simon, in contrast, showed the Lord little love because he felt little need of forgiveness. He didn't think of himself as a sinner. He thought of Himself as righteous.
We might also note, with the presence and absence of love, there also seems to be a presence and absence of joy –as Pope Francis frequently notes, the sinner who has been forgiven rejoices.

To conclude. Let us each consider where we fit in these comparisons. Do we manifest the indifference and lack of gratitude for forgiveness that Simon showed, or the effusive love the woman showed in her awareness of her sin and her awareness that the Lord Jesus had forgiven her?
If we don't experience such an awareness, let us examine ourselves for signs of spiritual hypothermia. It may be that the reason I have stopped shivering over my sins in not that I am a saint, but rather, that I have let the life of grace die within me.
Wherever we are in that spectrum of spiritual hypothermia, let us pray to the Lord to warm our cold heart. “Jesus, Son of David, have mercy on me”(Lk 18:38) a sinner
Posted by Fr. Dylan James, Catholic Priest, dual American-British citizen at 13:14