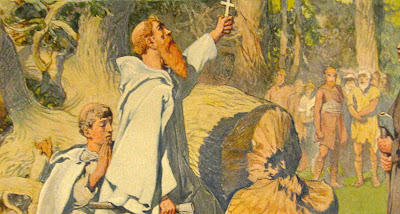 All the world knows what a Christmas tree is, we see them everywhere. But few of us realise that these trees were invented by St Boniface.
We might also note that, if you list the most influential Catholic countries in history, you’d have to list Germany among the most significant: The Holy Roman Empire that politically defined Christianity for centuries was centred on Germany. We can also note that Germany has produced great Catholic scholars, magnificent churches, and some of the greatest and most influential theologians of the 20th century. BUT none of this would have happened if not for St Boniface, because he was the man who set off, and succeeded, in converting the pagan tribes of Germany to Christianity.

St Boniface did great things, and was hugely influential.
But he came from somewhere small and remote. He was born in the 8th Century in the little place of Crediton, in Devon, not far from Exeter. Even today Crediton is a small place, and it must have been even more obscure then. He joined the local abbey in Exeter, after formation went to another abbey in Nutshalling, and was so respected by his fellow monks that they wanted him to become abbot when the abbot died. Instead, Boniface went off to convert the Germanic tribes.

There was a Germanic tribe that he wanted to convert, a tribe who worshiped the pagan God Thor, and did so at an oak tree, called “Thor’s Oak” (or Jove’s oak, or Jupiter’s oak, or the Donar oak). These pagans thought this tree, and others like it, had sacred power. To prove them wrong St Boniface chopped down the tree. The locals were so amazed that he was not struck down by the pagan god Thor that they realised that Thor didn’t really exist, and they became Christians.
St Boniface used the wood from the oak to build a church.
And he then used the evergreen fir tree (unlike the oak) as symbol of Christ at Christmas, green all year, living all year, powerful all year, even in winter and suffering and cold.

St Boniface, over the years, set out to convert many different peoples, and was ultimately martyred. But not before he had converted so many Germanic tribes that he merited the title “Apostle of Germany”, where he is venerated even more than we in England venerate St Augustine for bring the faith to us from Rome.

Now I will draw a simple conclusion from all this:
St Boniface came from humble little Crediton, but God worked great things through him.
You and I can often feel that we are too small or insignificant to do great things. But God works as HE chooses,
and, to quote St Paul, His grace is made perfect in weakness;
and, to quote Our Lady in the Magnificat, He raises up the lowly and casts down the mighty.

So, the next time you’re tempted to thing you’re not significant enough for God to work through you, remember St Boniface:
Remember that all the world knows of Christmas trees, because of this man of obscure origins;
And remember that God can work through you too.
Posted by Fr. Dylan James, Catholic Priest, dual American-British citizen at 17:00