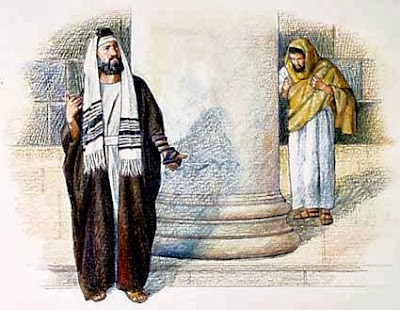 Lk 18:9-14
I want to say a few words to help us grasp the surprise that the Lord Jesus’s listeners got in that parable.
When you and I just heard that parable in the gospel, we didn't hear it in the way that the people in ancient Palestine heard it. When they heard it, they heard the beginning without knowing the end, whereas, when WE heard it we knew the ending already, we knew that the sinner was declared righteous by Jesus because he confessed his sinfulness. That, however, would have been an ending that would have come as a total SURPRISE to the people listening to Jesus.

Picture how the telling of the parable would have gone:
The Lord's listeners would have heard the description of the Pharisee, and would have listened to everything he referred to himself as doing, and they would have been impressed:
here was a man doing all the right things. He fasted on the right days, he tithed the right amounts. Here was a man doing things right. And when he said he was not “like the rest of mankind”(Lk 18:11), he was simply stating a fact.
In contrast, there was the man he was being compared to, a tax collector
-such men are not popular today, but they were utterly despised in ancient Israel, despised as collaborators with the Roman oppressors, despised as men opposing God's Chosen People (by collected taxes from them for the Romans).
So, when the Lord says at the end of the parable that it was the tax collector who went home "at rights with God"(Lk 18:14), this would have been an ending that really SURPRISED His listeners.

Jesus was pointing out what it is that TRULY puts a person "at rights with God".
For us to try and grasp the point, try and get that 'surprise' that I said the original listeners got, let us think of the different ways that we each, habitually, tend to define what makes a 'good' person.
I have no doubt that each of us here have different criteria, different things that we look at in other people, the things that lead us to say, "Now, that's a GOOD person".
Some of us might look at someone who gives money to charity on a regular direct debit from the bank,
Or some of us might look at someone who spends a lot of time with his/her family,
Or some of us might look at someone who is hardworking and not lazy.
In each case, some of us here would define 'good' predominately in such terms.
and we would tend to think that such 'good' people are the ones who are "at rights with God".

Each of those things are good things, good deeds.
Yet, if we listen to that parable, the Lord seems to largely cast such things aside.
He is not saying, I think it’s obvious to point out, He's not saying that it's not good to give to the poor, spend time with your family, and be hard working etc.

So, to return to where I began: the SURPRISE that the Lord's listeners got.
Of course, some may not have been surprised, they may have already remembered the Old Testament teaching about the humble being precious in the sight of God.
But it would seem that SOME had forgotten.
And if we too have forgotten, then let us take the Lord's words to heart, let us not “pride ourselves on being virtuous” (Lk 18:9) but rather let us seek to make the tax collector's prayer our own:
"God, be merciful to me, a sinner"(Lk 18:13).