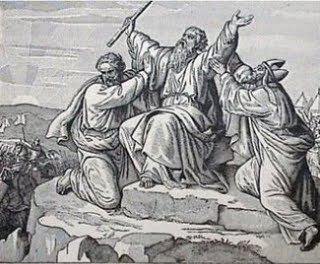 Lk 18:1-18; Ex 17:8-13
We just heard Jesus talk about the importance of asking for things in prayer, in particular, we heard Him talk about the importance of PERSISTENTLY asking for things in prayer. People often ask the question, "Why do we need to ask God for something when Him already knows?" And people sometimes push the point further by asking, "Why must I persevere? I asked for it once, why must I ask for it again?" These are good questions, and I want to give a brief summary of some answers that have been given to those questions.

The first, and most important reason why we should ask for things even though God already knows what we need, is that He tells us to: Time and again in the Gospels, not just in the parable we heard, Jesus says "ask”(Mt 7:7). So, even if we do not understand WHY, we should do so because He has told us to -and He is wiser than we are.

In addition, we should ask for things in prayer because it is GOOD FOR US to ask for things in prayer, and it is good for us in two ways:
• it reminds us of the fact that we need Him, i.e. that we are not all-powerful ourselves, that we are small weak and fragile, and that nonetheless there is One who is not small weak and fragile and can help us in our need.
• But, prayer is good for us not only because it reminds us of our need of Him, but because prayer CHANGES US. St Augustine is probably the writer who has written most beautifully on this point, and he notes how when we pray, "thy kingdom come" our very making of the prayer begins to form that Kingdom within us. The more persistently, over the greater period of time, that we are engaged in prayer in petition, the more that prayer will change us. And, the more prayer changes us, the more prayer MAKES US READY to receive the gifts that the Divine Giver wishes to give us.

Finally, I would point out the simple truth that we should pray because God DOES answer prayer:
Our first reading from the book of Exodus records how the prayer of Moses for the people had an effect: as long as he prayed the Israelites were victorious over the Amalekites who were attacking them, when he gave up praying they began to be defeated, yet with his perseverance in prayer they crushed those who would have crushed them.
That pattern that we read again and again in the Old Testament was repeated also in the New Testament. For example, when St Peter was in prison the early Church prayed for him, and it was then that the angel was sent to rescue St Peter from the prison (Acts 12:15).
God does answer prayer:
He promised he would do so, Scripture records His frequent occasions of doing so, the experience of the Church down the centuries is that He does so, and many of us here can testify to this in our own lives too.

So, why should we ask for things when God already knows what we need?
Because (1) He tells us to do so; because (2) doing so reminds us of our need of Him; because (3) praying changes us and makes us ready to receive the gifts He wishes to give us; and (4) last but not least, because He does answer prayer.
Posted by Fr. Dylan James, Catholic Priest, dual American-British citizen at 00:30