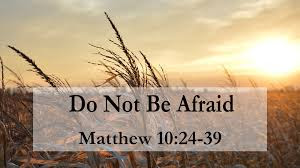 Mt 10:26-33; Jer 20:10-13
We just heard a promise from the Lord that relates to how we are to respond to many of the sufferings of life. He tells us, “Do not be afraid” (Mt 10:26).
More particularly, He tells us to not be afraid of those who can hurt the body but cannot hurt the soul.
There are other passages that relate to the promises He makes us sustain us even amidst the difficulties of the body, but here the focus is on the eternal, the TRULY disastrous damage, namely, whether we would lose or gain our immortal soul.
About this He tells us, “Do not be afraid”.

To help reflect on this promise in Matthew’s Gospel, the Church offers us today our first reading from the prophet Jeremiah. If you recall your Old Testament, Jeremiah had a tough role and a tough life. God had called him to tell the people that their capital city, Jerusalem, was about to be destroyed by the enemy and the people taken into captivity. This wasn't an popular message.
True, he also had a promise of salvation if the people would only repent and turn to the Lord. But the people weren't very interested in that. They just hated him for his message of destruction. And so, as we heard in that first reading, they plotted his destruction. “Denounce him! Let us denounce him!”(Jer 20:10).
Jeremiah, however, as we heard, trusted in the Lord. And when the city was destroyed by the Babylonians and the people taken captives, Jeremiah was spared and set free.
God delivered Jeremiah.

This is a two-fold model for the disciple:
The disciple can expect persecution, just as Jeremiah was persecuted for the unpopularity of his message.
But the disciple can also rely on the Lord’s faithfulness to him, if he has been faithful to the Lord.

In its DIRECT application, this means the Lord will raise up the disciple despite the suffering that come from the disciple spreading God’s word.
In every era there is always a different aspect or set of aspects of God’s truth that is not accepted in a particular culture. And that will make the disciple hated, despised, and left suffering in the “body” -the “body” in the sense of those aspects of our life that are transient. Despite such suffering the disciple can confidently entrust his immortal soul and future to God, who will raise him up as Christ was raised.

In its INDIRECT application, this also means that the Lord will raise up His disciple in ALL of the sufferings we endure while following Him. So, when we face bodily suffering, this passage urges us to entrust ourselves to the eternal. Yes, the sufferings of the body are real, but if we endure them with love and patience, then we too will be raised up.
And, as a consequence, this should free us from worry about eternity.
“Do not be afraid of those who kill the body but cannot kill the soul. … Why, every hair on your head has been counted… if anyone declares himself for me in the presence of men, I will declare myself for him in the presence of my Father in heaven”(Mt 10:28-33).
Posted by Fr. Dylan James, Catholic Priest, dual American-British citizen at 00:30