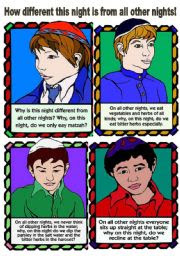 The Jewish Passover meal, as it was observed 2000 years ago and is still observed today, has were four cups. The meal also has four questions.
As many of you will know, in the Jewish Passover meal, still today, the youngest child at the meal asks, asks about the meal, “Why is this night not like other nights?” And then asks four sub-questions about how the meal is different to other nights. Each of the answers the child is given point to the original Passover, which we heard about in our first reading, by which the Jews were rescued from Egypt.

Let me point to more detail.
First, the child points out that on other nights the family eats leavened bread, and asks why on this night they only eat unleavened bread. The reason for this is that the original Passover meal in Egypt was eaten, as we heard in our first reading, “hastily”, with no time for the bread to rise.

Second, the child points out that on other nights the family eats vegetables, but on this night only bitter herbs. This is to remind them of the bitterness of slavery that they knew in Egypt, that the Lord released them from in Egypt.

Third, the child points out that normally the food is not dipped even once but on this night it is dipped twice. This dipping of food into salt water is a reminder of the tears of sorrow the Jews experienced in slavery.

Fourth, and finally, the child points out that on other nights the meat can be boiled or stewed, but tonight can only be roasted. This points them to the original Passover lamb, which, as we heard, God decreed was to be roasted.

All four of those questions point backwards towards a specific act in history that saved the Jews from a specific situation they were in. They were saved from the bitterness and tears of slavery. They were in haste to flee their oppressors. And they ate a sacrificial lamb according to the command of the God who saved them.

In a parallel manner, the Eucharist, “the Lord’s Passover” (Ceremonial n.297), points us backwards to a specific act and situation in history. The situation we were saved from was the slavery of sin. The specific act that saved us was the death of Christ on the Cross, the sacrificial death of the lamb of the new Passover.

Let me pose questions and answers about the sacrifice of the Eucharist.

First, why is bread and wine taken?
Because these are what Christ chose to take at the First Mass, at the Last Supper.

Second, why do we treat them with such reverence?
Because they are changed into what Christ said, namely, His very self: His Body and Blood, Soul and Divinity.

Fourth, why do we EAT this?
Because Christ gave Himself, as He promised, as “the Bread of Life” (Jn 6:35) and said that “unless you eat my flesh… you cannot have eternal life within you”(Jn 6:53).
He has given us His very self to be the food for our souls.
The food He gives us is not a part of Him, or a bit of Him, but His WHOLE self. He is whole under the appearance of what was once bread. He is whole under the appearance of what was once wine.
In receiving either we receive the whole Him.
In receiving both, as we do tonight, we receive not a greater reality, but a greater sign, namely, that of His death -as blood separated from body brings death.


To sum that up, the Passover of the Old Covenant was a ritual that looked back to the original Passover, and the parts of that ritual symbolically looked to that original Passover.
The Mass, “the Lord’s Passover” (Ceremonial n.297), is similarly a ritual that looks back, and the parts of its ritual signify that original saving event of the Cross.
HOWEVER, the Mass, Christ’s great gift to us, not only reminds us of that past event, but it makes it PRESENT:
the sacrifice of the Mass is the same sacrifice as the sacrifice of the Cross;
and the food of the Eucharist is the same flesh that died on the Cross and Rose three days later.

Both the old and the new Passover can only be understood by recalling the original event they signify.
Posted by Fr. Dylan James, Catholic Priest, dual American-British citizen at 19:30