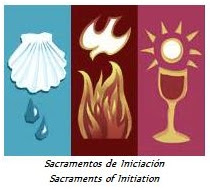 Tonight is a wonderful night for our parish because we’re receiving someone into the Church, Robert Tawse.
I’d like us to consider what will change for Robert, because it’s also a reminder of each of us are called to.

Tonight, most basically, is about Robert and the Lord Jesus, and Robert finding the meaning of his life in union with the Lord Jesus.

For Robert, tonight is both an end and a beginning.
It’s the end of the process that began with his baptism: the process of being sacramentally initiated into Christ and into His Church.
Baptism began that process.  In baptism we die and rise with Christ.
As for many of us, that happened for Robert in his infancy.
Baptism, however, is not the end.
Baptism gives the Holy Spirit, in part, but not in fullness.  The fullness is given sacramentally in Confirmation, as Robert will be confirmed with the sacred oil of Chrism tonight.
Baptism gives union with Jesus Christ, but not in fullness.  The completion of initiation into Christ happens with the Eucharist, when we receive the Lord in Holy Communion, as Robert will do for the first time tonight.
As St Augustine notes, when we eat normal food, our body digests it and it becomes a part of us.  In contrast, when we eat that food which is the Lord Jesus, we become a part of Him.
We become part of His Body, rather than Him becomes a part of our body.
We are initiated into something greater than ourselves.

In all of this, Robert is completing something, ENDING something that began in his baptism.
But it’s also a new beginning.
We celebrate it at Easter, to symbolize the old dying and the new rising, not by our power, but by union with Christ Jesus in His Paschal mystery, His dying and rising.
Tonight Robert becomes someone new, acquires a new identity in Christ.
This, therefore, is also a new beginning.
In baptism, in dying and rising with Christ, we are called to holiness, we are called to become SAINTS.
What sort of saint might Robert become?
The saints aren’t all the same.
‘Grace build on nature’ as the scholastics say.
God takes our natural temperament and abilities,
For example, some people are hurried and quick, others are slow and careful
And God TRANSFORMS our natural characteristics, but doesn’t DESTROY them.
What will Robert look like as a saint?
On one level, Robert will still be same old Robert.
In being called to be a saint he is NOT called to become someone else.
The hipster beard will still be there.
The absence of hair on his head will still be there.
To become ‘saint’ Robert, he doesn’t become someone else, but becomes more fully himself.
The full man, the complete man, is Jesus Christ.
It is IN Christ Jesus that we are fully REVEALED to ourselves.
It is in UNION with Christ Jesus that we BECOME fully ourselves:
Stronger -by His power, not ours;
Better capable of love -by His power, not ours;
More alive in His Spirit -by His power, not ours.
-none of these changes are automatic:
the gifts Robert receives tonight will only bear fruit in as much as he uses them.

I started by saying that tonight is about Robert and the Lord Jesus, and Robert finding the meaning of his life in union with the Lord Jesus.
It an end, because it completes the sacramental union:
Baptism, Confirmation, Holy Communion.
It’s a beginning, because it opens the pathway that we have in the power of Christ,
The power to be transformed, transformed into Christ, into a saint.