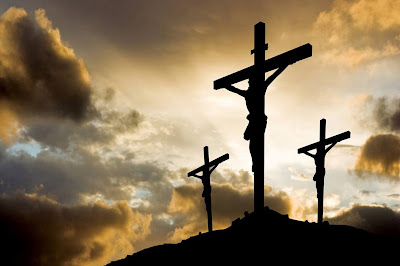 Jn, 18:1-19:42; Isa 52:12-53:12
There is a specific moment, every year during the Good Friday and Passion liturgy when I feel a little odd, and no doubt many of you feel it too: the moment when Jesus dies, and we kneel down.
It’s not just that I feel sad, but I feel kind of funny, odd.
God died on a tree.
We stop in silence.
And there is a much deeper sense in which the whole cosmos must have stood still at that moment.
The ancient hymn that we use in the Office of Readings for tomorrow speaks of how, “The cross stands empty in a world grown silent”.
It feels like all has stopped. It feels like nothing is happening.

What did the people looking on think 2000 years ago? To most who saw it, it would have looked like defeat. To the faithful few who stood by Him at the foot of the Cross, they still kept faith –but faith in what?

But, what did HE says of it?
WE might sense silence, sense absence, sense the defeat of God.
But He, He said, as He gave His last breath, He said, “It is accomplished”.
And as He had said so many times in different ways in the build-up to this event, and as we heard Him say in that account just read, He said, “I was born for this, I came into the world for this.” And now, “it is accomplished”.

Let us consider for a moment, even if only briefly, let us consider WHAT was accomplished.
The prophecies of old were fulfilled, of one who would bear our sufferings and carry our sorrows (Isa 53:4).
A sacrifice was made for our sins:
“Behold the Lamb of God who takes away the sins of the world”(Jn 1:29)
A definitive confrontation with evil was wrought.
And, the One Eternal God was united to us in OUR pain, in our woes.

Or, rather, what the Cross means is that I am not alone. He is with me.
I am not weak, for He will be my strength.
And in that silence, the suffering that seemed to be absence of God is revealed as His most definitive activity.


(Postscript: Can we truly say that "God died"?
Yes, by using “the ancient patristic teaching on the communicatio idiomata. In the Incarnation we recognise the union, in the Person of the Logos, of both the divine and the human natures. Thus, the properties or characteristics of either the divinity or the humanity can be predicated of the divine Person who is the subject of the Incarnation. In this way, even though it is only characteristic of humanity to die, death can nevertheless be predicated of the one God-man in light of the hypostatic union. Since Jesus is a divine person, we can truly say that God suffered and died. The patristic tradition… made use of this doctrine to show the loving involvement of God, through the Incarnation, in our human predicament of suffering and dying.”(Ed. Lewis Fiorelli,OSFS, The Sermons of St Francis de Sales for Lent (Charlotte, North Carolina: TAN Books, 2010), p.207, n.6.)
Posted by Fr. Dylan James, Catholic Priest, dual American-British citizen at 15:00