Why? 3rd Sunday of Easter, Year B 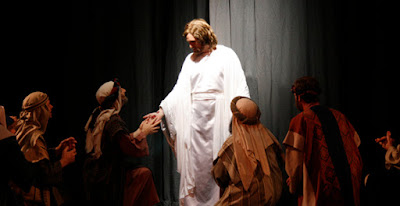 Lk 24:35-48
I spent last week with my family, and saw a lot of my nephews and niece. I’ve seen them progressively grow through various phases. I remember the difficulty of the “why” phase about 5 years old.
The sky is blue, “why?” Flowers come out in spring, “why?”
They’ve now graduated to tougher questions.
One of my nephews said, grasping that I’m a priest, “Priests know lots of stuff about lots of things, because they have to be able to help people”, which I think must be my sister’s way of telling him,
“Why don’t you save that question for your Uncle Dylan”.

So, in the midst of me assembling, yet again, the car racing track, my nephew stopped, and rather seriously said, “Can I ask you a question, Uncle Dylan?” And I thought, what? “Why did Jesus rise from the dead?”
Now, “how” Jesus did this, is a big enough question! And I just about answered that by saying that God can do anything, just as big people can do things that little people can’t do.
But, “why” –that’s an even bigger question, and it’s the one we find in today’s Gospel.

If you recall what had happened before the event recorded in today’s Gospel, Jesus had appeared to the two men on the road to Emmaus, and He had explained to them “all the passages in the Scriptures that were about Himself”(Lk 24:27).
He now appeared again, and indicated three things:
First, that despite the fact they were seeing someone who had died they should not be afraid: “peace be with you”, He said.
Second, that He was not just a phantom or ghost: He ate food, and had them touch His hands and flesh.
Third, and this is my main point, He gave them the “why”: He explained the Scriptures to them, and said, “Thus it is written, that the Christ SHOULD SUFFER and on the third day rise from the dead, ...”(Lk 24:46-48).

To fulfil the Scriptures, that is why.
While that is a complete answer, it is a very brief summary, and could have a much longer explanation (and we can note that the Gospel text does not offer more than this statement of it). In short, “to fulfil the Scriptures” means that everything we see in an incomplete way in the Old Testament, we see in a COMPLETE and perfect way in Christ: It was all waiting for Him to bring it to completion.
I’d like to refer to one part of the fulfilment of the Scriptures, as indicated in our second reading, namely, that the Christ was “To be the sacrifice that takes our sins away”(1 Jn 2:2) –a fulfilment that the Scriptures looked to in many different ways:

The Old Testament Scriptures taught by command that blood sacrifices must be offered for sin;
As St Paul summed it up, “without the shedding of blood there can be no remission of sins”(Heb 9:22 cf Ex 24:6-8)
But the Old Testament also said that the sacrifices weren’t good enough;
And there was a continual looking for something better, the promise of a NEW Covenant.
The Old Testament ritual had the blood of the Passover lamb shed, but a better more perfect lamb was needed:
Isaac’s question, “Where is the lamb for the sacrifice?” (Gen 22:7) echoed at a deeper level down the centuries, until finally, John the Baptist cried, “Behold, There is the lamb” who takes away the sins of the world (Jn 1:35) [c.f. Archbishop Fulton Sheen’s exegesis]
Christ’s dying thus fulfilled the Scriptures –one example of how He made complete what was in-complete.

So, “why?” Well, my nephew knows that most answers raise still further questions. And while the answer in today’s Gospel does that too, it is the true answer nonetheless.
Why? Because “it was written”.
Why? That we might be forgiven.
Why? “that repentance and forgiveness of sins should be preached in His name to all nations... You are witness to these things”(Lk 24:46-48).
Posted by Fr. Dylan James, Catholic Priest, dual American-British citizen at 00:30