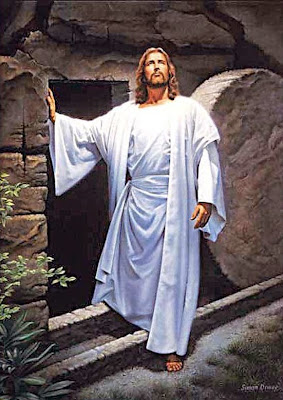 The fact that the tomb was empty came as a surprise to the disciples of Jesus. Even though the Lord Jesus had predicted it many times to them (e.g. Mt 20:19), the Gospels record that His disciples hadn't understood. Now this point is worth noting because it indicates just how trustworthy the Gospel records are: if the Gospel records were not recording FACTS then they would have been written to make the disciples LOOK GOOD, to highlight their good points, because, after all, they were the early Church LEADERS. The Gospels, however, record the opposite: that the disciples were slow to be understand the Lord’s true message, and even worse that they were worldly and competitive (e.g. Mk 9:34).

And they were right to be surprised. This was an event unlike any other in history.
People do not rise from the dead.
Yet, here was someone who did.
For three years He had, as we heard St Peter recall in our first reading, He had gone “about doing good and curing”(Acts 10:38), preaching a Gospel calling for repentance (Mk 1:15) and offering the forgiveness of sins. He claimed that He had the authority to many things that only God can do, like offer the forgiveness of sins (Mk 2:10), something that only God can do (Mk 2:7). He was therefore condemned to death as a blasphemer (Mk 14:62-64). And was crucified.
And then, after three days in the tomb, the tomb was found to be empty.
And, more, for a further forty days He appeared to at least 515 witnesses (that's how many the Scriptures record, there may well have been more).
These witnesses did not see a ghost. Rather, as we heard St Peter recount in that first reading, they “ate and drank” with Him (Acts 10:41), they also touched Him and St Thomas even put his fingers into the wounds in His hands and side (Jn 20:27).

What did these witnesses gain for telling others that they had seen the Risen Lord?
They at first earned doubt and derision. Then they earned persecution and martyrdom.
They had no reason to make this up.

But, there is something they gained, and it is the same thing that you and I can gain if we accept their testimony today: the hope of a better life, eternal life.
And living in the knowledge of that life changes how we live and experience THIS life here below. So, as we heard in our second reading, it empowers us to “look for the things of heaven, where Christ is”(Col 3:1), to look to where our TRUE life is. Because if we die to self, die to sin, we can rise to Christ and in Christ, because “He is our life”(Col 3:4) –if we will but let Him be so.

Inside your newsletter there is a sheet summarising some of the reasons for believing in the Resurrection.
You could also view this video offering reasons for believing in the Resurrection.
It is not a myth. It is not just wishful thinking. Accepting it, and therefore accepting HIM, can change our lives –if we will but accept the evidence
Posted by Fr. Dylan James, Catholic Priest, dual American-British citizen at 08:30