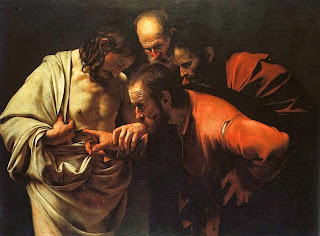 Jn 20:19-31
I would like, this morning, to reflect on the experience of the 11 Apostles in the Upper Room, the experience we just heard recounted to us in that Gospel account: of how they met the Risen Lord.
Let us remember what they experienced: they met a man who was dead. And it is hardly to be considered surprising that His first words to them were words to calm them, "Peace be with you"(Jn 20:19).

We might, perhaps, compare them to ourselves:
They had already heard rumours that Jesus's body wasn't in the tomb, that the women who had gone to the tomb had found it empty, that Peter and John had also gone to the tomb and found it empty. They had heard these things but hadn't yet believed.
We, likewise, have heard such things, heard them, perhaps, in a way that hasn't made as great an impact on us as it should. We have heard these things, perhaps, as if it was just a rumour from the past. We, like them, need to encounter something MORE to grasp what has a happened, to grasp what it's all about.

What happened to "the Ten", i.e those of the twelve apostles who were present in the Upper Room on that FIRST appearance of the Risen Lord to them?
They had thought the Lord was dead. He confirmed to them that He was indeed the One who had died, confirmed it by showing them his hands that had been nailed to the cross and His side that been pierced through with the spear. And yet, He was no longer dead. He wasn't weak and wounded, He hadn't just somehow survived the crucifixion. No, He had RISEN from the dead.

Let us note the effect this produced in them: "joy"(Jn 20:20). This, in fact, is one of the characteristic effects that can be seen when people encounter The Lord: as Pope Francis noted in Evangelii Gaudium, “joy… fills the hearts and lives of all who encounter Jesus” (EG n.1). And though we are now at the END of the Gospel narrative, Pope Francis notes that we can see this at the beginning too, “The apostles never forgot the moment when Jesus [first] touched their hearts [when He called them from their fishing nets by the lakeside]: [thus the Gospel writer recalls the exact time it happened]: ‘It was about four o’clock in the afternoon’ (Jn 1:39).”(EG n.13).

You and I, however, did not encounter Him at the lakeside; You and I did not have Him appear to us after His resurrection. As I noted earlier, you and I can thus be like those who have somehow only heard of the Resurrection as a distant rumour.
For us, therefore, the figure of doubting Thomas (forever recalled as "doubting Thomas", even though a week later he did come to faith), the figure of doubting Thomas is vitally important to help you and me encounter Christ still today. Thomas is important because His initial doubts make his eventual faith all the more significant in enabling us to accept the historical reliability of their account:
The process of hesitation, doubt, and only then believing is a process that carries with it the ring of authenticity, a ring of authenticity that enables us to place our trust in the entire narrative. It enables us to accept the reliability of the whole text, as it concluded today: "There were many other signs that Jesus worked and the disciples saw, but they are not recorded in this book. THESE are recorded SO THAT you may believe"(Jn 20:30-31).

The Apostles were not incredulous fools. They knew they had experienced something unknown in human history: a man back from the dead, a man who claimed to be not just a man but God Himself incarnate, a man who proved it by His Resurrection from the dead, and with witnesses who died rather than deny the truth of what they saw and testified to.

As I said, that encounter with The Lord change them, it filled them with "joy". And if we hear and accept the testimony of those witnesses then we too can encounter The Lord today, in our hearts, and the joy of the believer can be ours too.