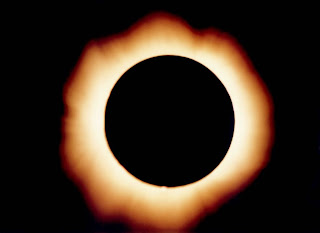 Mt 26:14-27:66
In reflecting on the significance of what we have just heard I would like to draw our attention to four physical events that surrounded Our Lord's death. Four events that Matthew records to highlight the cosmic significance of the Passion.

First, "there was darkness over all the whole earth"(Mt 27:45) from the sixth to the ninth hour. Such a physical darkness was a sign of the great evil humanity was wreaking by crucifying its Creator on the Cross. This darkness was not just in Palestine but, as Matthew says, "over the whole earth" and pagan writers elsewhere recorded it: The (gentile) Greek historian Phlegon, and the (gentile) Greek Apollophanes, Dionysius the Areopagite likewise declares that he saw it in Egypt at that time, and Lucian the Martyr also notes how it had been recorded in the (secular) Annals of ancient Rome.
[references in: St Robert Bellarmine, 'The Seven Words Spoken on the Cross', Book II, Chapters 1 & 5.]

Second, the earthquake. The very earth itself seemed to recoil in horror at what was done to its Creator: "the earth shook, and the rocks were split". Humanity had little appreciation of what it was doing, but the creation itself somehow sensed it.

Third, "the graves were opened; and the bodies of many saints rose, and after His resurrection they went out into the city and appeared to many"(Mt 27:52-53).
We can consider this event from two angles:
Literally, we might note the historical reliability of this reported event: the gospels might be accused of fabricating events that fit an overly-tidy picture of what they want to portray. But this event is so peculiar, so odd, that none of the saints and scholars of the Church can quite agree about it, it is so peculiar that Matthew must be recording it because it really happened. For example, in terms of theologically describing it: the event is problematic in that it seems, at first glance, to have the "saints" rising before Christ rises, even though Scripture elsewhere makes a big deal out of Christ being the first, the "first born from the dead"(Col 1:18: 1 Cor 15:18).
Then, more importantly, it's symbolic significance: this raising of some of the "saints", it was a sign of the general resurrection of the body that Christ's death was to open up as a possibility for all humanity, that because of His death we might have a possibility of life after death. And this partial resurrection of a few of the "saints" was a sign of this.

The forth and final event to draw your attention to: "the veil of the Temple was torn in two"(Mt 27:51 c.f. Mk 15:38). Again, we can note this symbolically and literally. Literally, let us cast our minds forward and note that when St Peter first proclaimed the Good news at Pentecost "a great many of the [Jewish Temple] priests became" Christians (Acts 6:7). Why should those who were among the leaders of those who crucified Him so instantly become his followers? One explanation is that these same Jewish Temple priests saw and experienced their own horror at their Temple veil tearing in two at the moment of Christ's death.

Let me close, however, by drawing all this together by noting the symbolic significance of the Temple veil being option in two. The opening of this veil opened our way to heaven. As the letter to the Hebrews (9:12; 10:20) says, Christ Himself, by His sacrificial death, has entered the inner holy of holies, taking not the blood of bulls or calves, but His own sacrificial blood. His sacrificial offering has thus made "purification" for our sins, an "eternal redemption". He is the Lamb who takes away our sins.
He has opened for us the way to paradise, a way that our sins had closed.
Posted by Fr. Dylan James, Catholic Priest, dual American-British citizen at 00:05