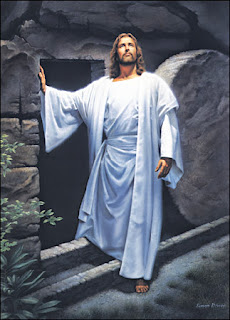 Jn 20:1-9; Acts 10:34,37-43
I want to speak today about the importance of meeting The Lord Jesus, of having an encounter with Him.
Today is Easter Sunday, when we recall how The Lord rose from the dead three days after He had been crucified.
But I wish to speak this morning, not so much about Him, as about the change that meeting Him, meeting him after His resurrection, the change that that encounter produced in those who met Him.

One of the things that is clear in the accounts of all four of the gospels is that the disciples were not expecting Jesus to rise from dead. Even though He had predicted it: predicted that He would be arrested, be crucified, and then that He would rise on 'the third day' -even so, they didn't expect it. It's as if His being put to death had squashed any hope that they had had of His being the triumphant messiah-king.
Their not expecting it is shown in the way that each time someone is told that someone else has seem The Lord 'risen', instead of accepting the statement they doubt it, or just go on with their lives anyway (like the two men who headed off to Emmaus, despite having heard the report that He had Risen), or others, like Peter and John who insisted on going to look for themselves.

Peter and John went to see, for themselves, that the body was not in the tomb. The empty tomb is half of the proof of the resurrection: no one ever claimed to FIND the body, not there or elsewhere; if anyone had MOVED the body they would certainly have said so when people claimed that He had risen; and if the disciples themselves had HIDDEN the body then we would expect that at least one of them would have confessed when they were martyred.

The other half of the proof is what we heard St Peter refer to in our first reading: the WITNESSES who MET and SAW Him after He had risen from the dead.
The brief Gospel text we heard this morning didn't give an account of the Risen Lord appearing to anyone -we'll hear that recounted in the following 6 weeks of Eastertide.
But what St Peter's preaching already indicates is that something had changed him: changed Peter from being a sad and dejected and cowardly man, a man who had disowned Jesus three times rather than risk being arrested with Him -changed Him into a joyful, confident leader who preached to crowds about what he had seen, about how he and those with him had witnessed The Lord after He rose from the dead: "we are those witnesses -we have eaten and drunk with Him after His resurrection from the dead"(Acts 10:41).

Their encounter with The Risen Lord changed them.
And it changed them in such a way that they became witnesses to everything Jesus had done and said, witnesses who went out and told others about Christ. They told others of Christ, by the power of the Holy Spirit, and their preaching presented Christ to others in such a way that they too "encountered" Christ.
Those original witnesses had encountered The Lord PHYSICALLY -as we heard St Peter say, they had eaten and drunk with Him, very PHYSICAL things to do. Whereas those they preached to, those they presented Christ to by their witnessing and testimony, those people encountered The Lord SPIRITUALLY -a real, if different, form of encountering Him. A different form of encountering Him, but a real one, one that meant they entered into a 'personal relationship' with the Risen Lord.

And the point is this: that through their testimony you and I have also been given an opportunity to encounter Christ still today.
And just as the first disciples, who thought they knew Him before He died and rose, and then came to know Him in a wholly new way went they encountered Him in His risen state, in a similar way,
even though you and I might think we already know Him,
even though you and I might think we already have a personal relationship with Him,
-even so, every day we called upon to meet Him anew, to encounter Him anew, to rediscover Him.
This is why Pope Francis said to the world in Evangelii Gaudium, "I invite all Christians, everywhere, at this very moment, to a renewed personal encounter with Jesus Christ, or at least an openness to letting Him encounter them; I ask all of you to do this unfailingly each day"(n.3).

Encountering the risen Christ transformed the first disciples.
And we, if we will listen afresh to their testimony, to what the witnesses said,
and accept it openly in the power to the Holy Spirit,
Then we can encounter Him anew ourselves,
And be transformed as truly as were Peter, John, Mary Magdalene and all the rest.