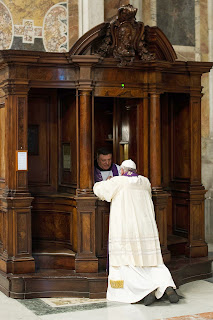 Ezek 37:12-14, Jn 11:1-45
I imagine that many of you will have seen the news clips of the Pope going to confession last week. Of course, Pope Francis is not the first pope to go to confession! But he was actually FILMED doing the whole thing (no sound recording, of course!), dropping into a confessional box on his way to hear confessions himself, and a film of the pope going to confession may well be another 'first'. And it seemed to really interest the media. What did the Pope say? What sort of sins did he have to confess?
Well, he's told us before that he goes to confession every two weeks. And, in case you hadn't noticed, month-for-month he's actually talked more about the importance of going to confession that any documented pope.
So, why does he go? Why should you go? And, how can you go better?

Our Scripture readings for this Sunday give us some powerful symbolic signs about sin.
We have the first reading, from Ezekiel, of the dead being raised from their graves, an Old Testament symbol of the people of Israel being raised from their sins.
Our Gospel text spoke of another rising from the dead, of Lazarus. That, again, is deeply symbolic, with the command that the Lord said of Lazarus, "Unbind him, let him go free", that is said of us too, of our sins. And note: just as the command of the Lord was put into effect by others, who mediated that unbinding, we likewise have our sins unbound through the mediation of Christ's Church, by the priest in the sacrament of confession.

Pope Francis tells us that he goes to confession because he knows he needs to experience God's mercy. As he says in his Apostolic Exhortation Evangelii Gaudium, "How good it feels to come back to Him whenever we are lost!"(n.3), to know the joy of the "encounter"(n.1) with the Lord in this way.
For some of you, I know, confession can feel like a burden, like just a duty. But it shouldn't do!
At last year's Synod on the New Evangelisation much comment and reflection was made about the experience of many of the new youth movements in the Church, of how many young Catholics have REDISCOVERED the practice to Confession that their parents' generation had 'cast off'. And that re-discovery has been of a uniquely important way of 'encountering' the Lord. And such 'encounters' are the whole "goal" of Evangelisation (Instrumentum Laboris, 2012 Synod of Bishops, n.18). Which is why the Synod bishops spoke of Confession as "The PRIMARY sacrament of the New Evangelisation" (Cardinal Dolan c.f. Synod Proposition 33).

This has been my own experience. It has been the experience of many of those around you here. But, what if it has not been your OWN experience? How can you make it so?

First, we need to see our sin.
Second, we have to bring that sin to Christ, for Him to forgive it, to cleanse, to make us new.
Now, often that two moments happen together. It can be a new encounter with Christ that shows us ourselves, including our sin, in a new way. That can't be forced on you, or on anyone. But, if we are aware that it is out there, that it is a possibility, then we have to look to Christ to bring it about.
So now, as our Lenten liturgy is getting ready for its final Passiontide season, the image of Christ Crucified, Christ who loves us, Christ who shows us what a good and pure and clean and loving life looks like -seeking to encounter Him, seeking to encounter Christ on the Cross can bring all this together:
The meeting Him;
The seeing our sin -in comparison with His goodness on the Cross;
And the desire to come back to Him in forgiveness.
The new examination of conscience in this Sunday’s newsletter, on the virtues Christ shows us on the Cross, is given to you to help with this. Please look at it, please come to confession this Wednesday night with the five priests here to hear your confessions, and know anew that encounter Pope Francis speaks of: "How good it feels to come back to Him whenever we are lost!"(n.3)