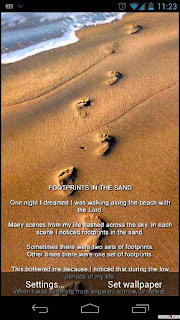 Lk 24:13-35
I want to say a few words this morning about about how The Lord accompanies us in our difficulties.

Often when we are finding life most difficult, it can be at those moments that we fail to see The Lord, fail to recognise that He is with us. When things seem tough, we feel like we're alone.
Maybe when we feel that our work, our labours, our talents, whatever we're doing -we feel like we not appreciated.
Maybe when we feel the physical pains of life -burdens that seem like they just won't go away.
Maybe when we feel cut off and alone in other ways.
Being in difficulty can be a very LONELY experience, and, ironically, it can be something that prevents us seeing the presence of the very ones who might be trying to support and accompany us.

If we think of the resurrection appearance to the two men on the road to Emmaus we see a similar pattern: their absorption in their difficulties, in "all that has been happening in Jerusalem these last few days" (Lk 24:18); about how their hopes that Jesus was the Messiah had been crushed by His arrest and crucifixion. -it seems that they were so absorbed in their pain that they didn't recognise that The Lord Himself was there by their side.
There is one other resurrection appearance when we see the same pattern, when Mary Magdalene is so caught up in her grief and weeping by the tomb that she fails to recognise The Lord Himself until He calls her by name, "Mary"(Jn 20:16).

We don't really know why they didn't recognise Him at first, it's quite unlike the other resurrection appearances in this regard, all we have is this obscure phrase, "something prevented them from recognising Him"(Lk 24:16). My own thought is that it might be linked with the all-too-common human phenomenon of being unable to recognise good things, and recognise The Lord, when we're wrapped up in our problems instead -or, at the very least, I think we can interpret it as being symbolic of this human phenomenon:

In both cases The Lord was there, the Risen Lord was there to console them, but it took some time for them to recognise Him.
Let me note further: it's not just that He was there, but He was there in His RISEN form -I.e. He was there to support and console them. And yet, despite the fact that the very reason He was there was to console them, they didn't see Him.
The point, for ourselves, is this:
We too have our problems, our pains, our experiences of isolation.
We too have these moments when it seems like the very times when we most need The Lord, it seems He isn't there.
But, for us, as for the men on the road to Emmaus, despite what we FEEL like, He is walking by our side. Even more, by grace He is within us, He is strengthening us, He is the One who is enabling us to go forward at all.
This, as I'm sure you've all heard before, is expressed in the old poem, 'Footprints', a version of which is on the sheet in the newsletter and we'll be singing later in the Mass.

But to conclude by bringing this to the Mass:
Those two men "recognised Him in the breaking of the Bread"(Lk 24:35).
We too, if we bring our problems to Jesus in the Mass, when we see Him here before us in the Eucharistic species, this is what enables us to see that this same Lord and God has been with us through everything else. Even when we feel alone, He is by our side.

But in my joy I caught a strain of sadness
To give me pause when thinking of my way
For on the shore I saw He’d left me lonely
When I had most the need of Him to stay:
When I was tired He’d left me worn and wandering,
He’d left me lone when I was fighting fears,
He’d let me tread the steepest slopes in solitude
Before He came back to my side to dry my tears.

But then the Lord drew near to me in comfort
And in His tenderness He made it plain
That in the times when dread and darkness threatened
He was my shield and shelter from the pain:
For on His shoulders He was gently bearing
And on His shoulders I from harm was free:
The single trace of footprints of the Master,
The single trace of footprints shows He carried me.

Hi there. I've been trying to message you on Facebook and have now sent friend request. Thanks for posting my Footprints hymn. I started wring it as a joke on the highest sand dune in Europe near Bordeaux but realised people would find it helpful so finished it seriously. Iwas wondering where you found it.

Hi Rob,
Thanks for the message. I'm afraid I can't remember which website I found it on. I was hunting around trying to find the original Footprints poem (as I guess you know, there are a few variations). I found your hymn version of the poem while looking for the text of the poem.
Quite a number of people in my congregation have found your hymn version very moving. Thanks for writing it.
Fr Dylan