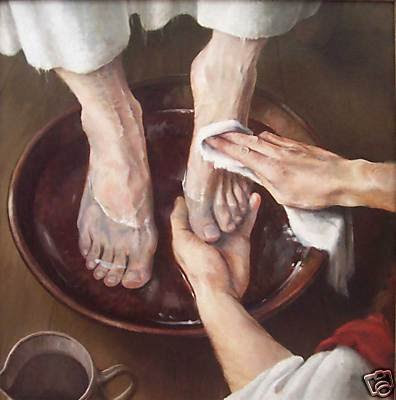 Tonight I will get down on my knees and I will wash the feet of some parishioners.
I don’t do this because I like other people’s feet,
And I think we can presume that Jesus, also, didn’t wash the 12 Apostles feet because He liked feet either.
I say this, because it’s important to remember WHY He did this, and why He did this at THIS moment.

The Lord Jesus was about to die.
He had journeyed far in His 3 years of public ministry: He, the long-awaited Messiah had come: He had cured the sick, He had forgiven sin, He had taught the truth of salvation.
Though they had repeatedly failed to grasp the depth of His teaching, and failed to grasp His meaning when he prophesied that He would die and rise,
That night, He had made His farewell speeches to His chosen few.
And, that night, He had given them the Mass: to be His abiding presence down the centuries;, and to be the means by which His Holy Sacrifice of Calvary would be made present every day in the Holy Sacrifice of the Mass.

And, then, in the midst of that profundity, He got down on the floor and started washing feet!
And my point to you tonight, is that this sign and gesture on His part was as equally profound as everything else He was about.
Washing feet is not just as act of love, but an act of humility –humility in the sense of that self-forgetfulness that is needed in any TRUE loving. True love needs to be so focussed on the needs of the other person that it puts aside the inconvenience and injustice that is done to us, and just gets on with whatever business love demands of us that moment.

Previously, the Lord has been self-forgetting when He left His Divine glory and dignity in Heaven, to walk among us, and suffer among us, in Palestine.
The next day, he would be self-forgetting in dying for our sins on the Cross.
That night, He had been self-forgetting in giving us His Real Presence in the Mass, because, though he knew men would be cold and indifferent to His Real Presence, would abuse His Presence, would neglect to genuflect, would receive Him in Holy Communion while thinking of a TV show, nonetheless, He also knew that this was the ONLY means by which He could physically contact each one of them, offer Himself to each one of us, as he does in the Mass.

But in order that it should be clear that all of this was not random, that it was all motivated by His humble and caring love, He, as tonight’s Gospel said, “He showed the depth of love”.

So, as I kneel, with whatever lack or height of grace tonight, to face feet, let us recall that this sign shows us “the depth of His love”.
Posted by Fr. Dylan James, Catholic Priest, dual American-British citizen at 19:30