Why did they Kill Him?, Palm Sunday 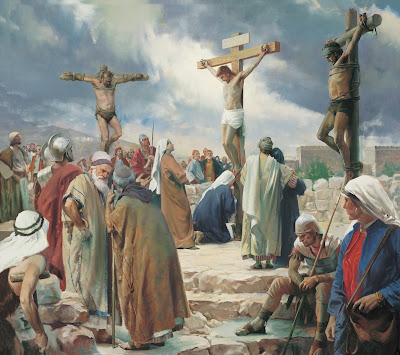 We’ve had a long Gospel, so I just want to ponder a simple question,
The question is, WHY did they kill Jesus? WHY did He die?

For people who do not believe in God, at all, the questions ‘WHY did they kill Jesus? WHY did He die?’ are a real problem, because they cannot accept what all four of the Gospels all say about this. Instead, they try and pretend Jesus was something they find more acceptable: that He was just a political troublemaker, that He died for reasons of social injustice, or, that it was because He threatened the Roman Empire.
That’s what BBC programmes, the DaVinci Code, and others, try and claim.

He came to His own and His own rejected Him. The Jews, His Chosen People, rejected Him.
But, we can’t blame the Jews, or blame the Romans, or blame events long ago. Their rejection is only an example of the rejection we make of God every day.
All our SIN is a rejection of God, a rejection of His love –and this is why He died
All the apparent reasons, whether they are political, jealousy etc, are only examples of this basic underlying reason –sin
They rejected His claim to be God. We, by our sin, reject the fact that He is God.
Why did He die? Because of my sin.
Who killed Him? I crucified Him

It is possible to contemplate that truth and feel glum about it, but it is actually a reason for us to rejoice:
That reason –sin, is what makes this event salvific, is what gives this event MEANING for us today.
If He died for other reasons, like politics, then He didn’t die for our salvation.
But if He died because of our sin,
then He died to undo sin –my sin
to overcome sin –my sin
to forgive sin –my sin

Sin is the reality at work on the Cross. Sin is the cause of the Cross, and sin is what was defeated on the Cross.
It is because it was about sin that it’s a cause for us to rejoice, to be glad and give thanks to God.
For in this He has given us a way to be forgiven, a sign and promise of forgiveness-
for all who call upon our crucified saviour.

The claim that Jesus died for a political reason, not a religious one is a claim made by unbelievers today –but it is not a new claim, it is claim repeatedly offered by those who wish to avoid His claim to be God. As we heard, it was claim the Sadducees brought against Jesus –but note, when they met by themselves their trial and concern was about blasphemy and His claim to be God. But when they brought Him to Pilate the brought another accusation, a false charge, of being a political agitator: Thus he was questioned about being the ‘King of the Jews’. But both Pilate and Herod found Him innocent of the charge of inciting political unrest. It was a false charge brought against Him by the Pharisees, and it is a false charge that is still brought against Him today by unbelievers. The Pharisees charged Him with it because they didn’t want to directly face the fact that He claimed to be God. And His claim to be God is what people who will not believe in God still refuse to accept today.

He died because He is God and sin rejected Him. “He died that we might be forgiven, He died to make us good, that we might go at last to heaven, saved by His precious blood.”
Posted by Fr. Dylan James, Catholic Priest, dual American-British citizen at 00:30