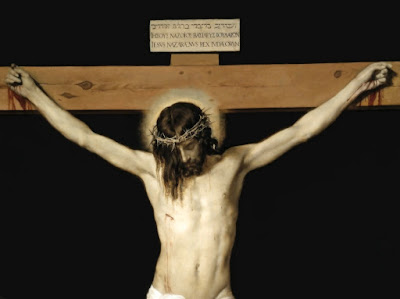 It's a great privilege for me to be able to preach today, because Good Friday is my favourite liturgy of the year. I love seeing the family at Christmas. And I know the importance that the Church places on Easter, and I believe the truth of what St. Paul taught: that if Christ had not been raised from the dead then our faith is in vain. But still, I prefer to linger here on Good Friday, and many of us do.

It’s not for nothing that Catholic Churches down the ages are more full on Good Friday than on the Easter Vigil. It’s not for nothing that the PEOPLE’s devotion down the ages has focused on the suffering and death on Jesus.
Part of the reason why so many of us are here today, and the reason that so many people down the ages have stopped to gaze at their crucifixes, is that when we look at Jesus suffering on the Cross, each one of us can see some part of ourselves in Him. Each one of us can say, "I TOO suffer", just as Christ suffers. Whether it is bereavement, illness, loneliness, or whatever personal suffering we endure. Each us is moved by the sight of Christ on the Cross, because we know, ourselves, what it is to feel pain.

But although I am attracted to the sight of Our Lord on the Cross, I am always left with the question, "Why?". What is it that would lead Him to this? As scripture says, it is indeed "scandal to Jews and folly to the gentiles"(1 Cor 1:23).

Part of the answer is in our first reading from Isaiah (52:13-53:12), which clearly tells us that Christ died on the Cross to atone for our sins: "He was pierced through for our faults, crushed for our sins... the Lord burdened him with the sins of all of us". It is central to our faith that we believe that justice is a very large part of the mystery of the Cross. And we all have times in our lives when we are very aware of our own guilt, and we are thankful that Christ died for our sins. And I could easily preach a whole sermon simply on guilt, justice and the Cross.

But this alone is not enough to explain the mystery of the Cross. Christ could have satisfied the demands of justice in a way that would have been much less burdensome to Him. As God, His actions had infinite merit, and as the hymn of Thomas Aquinas sings, one drop of His blood would have been more than enough to ransom the world's entire guilt. And on the cross there was much more than just a drop of blood shed. Justice was satisfied by the Cross, but it was more than justice that was at work here.

The meaning of the cross that I wish to draw our attention to today, is as a sign and an act of LOVE. The REASON that He so wildly exceeded the suffered he needed to undergo, was so that when we look at the cross, we cannot possibly doubt that He loves us.

I often think that I'd happily rise from the dead for someone, even someone I didn't much like. After all, if I had the ability to do it, it wouldn't be any harm to me. But I'd be much slower to agree to suffer and die for someone. And as St. Paul teaches us, what REALLY proves that He loves us, is that not only did He die for us, but He did so while we were still sinners. (Rom 5:8-9; 1 Jn 3:16).

(pause)
There are a number of words that Jesus spoke from the Cross, but two words that we heard today from John's gospel, words directed to each one of us, are "I thirst". The thirst that Jesus calls out for us to satisfy, is more than a simple drink. It is a thirst for love, a love from us to return the love He has poured out for us, a love that He displayed on the Cross.

Christ died on the Cross because He knew that the best way to draw a response from us, was to come and meet us in our suffering. As we know at a human level, it is when someone is united to us in our own suffering that we relate and respond best to them.

As the prophecy in Isaiah foretold, He was truly "a man of sorrows, acquainted with grief". He bore our sufferings and carried our sorrows. And as the letter to Hebrews makes clear, we have a high priest who is very capable of feeling our weakness.
So that in our pain and agony we no longer suffer alone, but in union with Our Lord and God.


And He didn't do this just out of some general love for an abstract concept of humanity, He did it out of a particular love for each of us as individuals too. As He accepted the cup of suffering in the garden, and as He hung on the Cross, He chose to die for each of us. In the beatific vision –the vision that He always had access to as the Incarnate Word, the true Son of God, He saw each one of us, loved each one of us, and accepted and offered His death for each one of us. So that, as St. Paul says in His letter to the Galatians, He “loved me and gave Himself for me”(Gal 2:20).
So that each one of us can say that He died for me, as certainly as if there was no one else in the world for Him to die for.
He died for ME.


(pause)
As we stop to venerate the Cross today, let us pause to satisfy His thirst for love. Let us recall that the Cross showed His love for us. Let us recall that no-one else in the world or through history has ever shown such a depth of love, no-one else has ever experienced such a depth of pain and sorrow.
As the prophecy of the book of lamentations calls out: "All you who pass this way, stop and see if there is any sorrow like unto my sorrow"(Lam 1:12),
and we know Christ would be well qualified to add, "is there any love like unto my love".